POLICE Commissioner-General Godwin Matanga (pictured) was on Friday left with egg on the face after more than 1 111 junior officers successfully challenged their “intermittent transfers” at their own cost, which they argued could not be sustained from their meagre salaries. 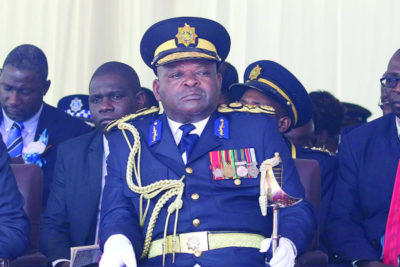 Chipanda, who had been earmarked for transfer to Nehanda Police Station in Mkoba 19, Gweru, said he could not afford the transfer cost on his $1 300 salary and pleaded with the court to note the civil servants’ call for a strike over poor remuneration.

Moyo and Zireva also submitted affidavits saying they had no capacity to move to their new workstations, which were not disclosed in court papers.

In an application heard before Justice Benjamin Chikowero on Friday, the police officers said the transfer costs were beyond their means and not in the best interests of their minor school-going children in light of the COVID-19 pandemic.

“My children are enrolled at schools in Harare, which I believe to be in their interest. I am alive to the fact that schools are still closed, but rumours are that they might reopen soon. If the rumours are true, it would mean that I would have to return my children to Harare from Gweru and look for someone to take care of them,” Chipanda said.

“My transfer was effected at a time when I had already paid my June rentals, I had already planned for the month. The financial implications of my transfer from ZRP Ruwa include buying new school uniforms, looking for alternative accommodation, schools and that represents gross inconvenience and irreparable harm since no allowances have been paid to me.”

The trio’s lawyers Gift Chihuta and Paddington Chinzou from Chakanyuka and Associates also cited violation of their clients’ rights.

“Applicants have children and have been subjected to intermittent transfers during the last four years. The cost of securing accommodation as well as paying school fees and buying school uniforms will seriously burden applicants, especially in this trying economic era considering their income,” they submitted.

Matanga recently admitted in Parliament that his officers were prone to accepting bribes because of poor remuneration.

The transfer refusal came hard on the heels of calls by the Zimbabwe Congress of Trade Unions for rolling protests over government’s failure to ensure a living wage for workers.

Civil servants last week rejected a 50% pay rise and US$75 three-month COVID-19 allowance, and demanded at least US$520 salary.