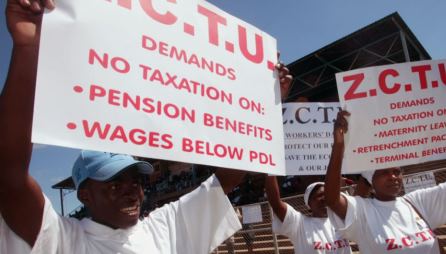 HARARE – Progressive Agriculture and Allied industries Workers Union of Zimbabwe (PAAWUZ) has blasted a collective bargaining agreement for the agricultural industry that was recently gazetted for the tea and coffee sub-sector.

This comes as Zimbabwe Congress of Trade Union (ZCTU) produced a report which indicated that at least 120 000 workers across the country worked without pay between 2015 and 2016.

The research is titled “Working-without-Pay-Wage-Theft-in-Zimbabwe” says 12 000 workers in the agricultural sector were not being paid, while 7 500 security sector employees and a further 7 500 in the automotive industry were also not paid.

PAAWUZ secretary-general Raymond Sixpence whose union is fighting tooth and nail to have farm worker wages increased said it was sad the recent negotiations could only unlock a $6 increment for farm workers in the tea and coffee sub-sector.

“This is a mockery especially coming after three years and as a union we urge the minister of Public Services, Labour and Social Welfare to act on such partly increases for this important agricultural sector,” said Sixpence.

The new wages range from Grade A1 which is the lowest with farmers earning $83 while the highest paid, Grade C2 comprising mainly clerks earning $164 per month.

The new wages were negotiated by a number of farmers’ organisations and ministry of Labour and Social Welfare.

The farmers’ organisations include Zimbabwe Tea Growers Association, Zimbabwe Commercial Farmers Union, Zimbabwe Farmers Union, General Agriculture and Plantation Worker’s Union of Zimbabwe, Zimbabwe Agricultural Employers Organisation and Commercial Farmers Union. Sixpence said the aforementioned farmers’ organisations were not representing farm workers’ interests to the fullest. “We have members at farms and the majority of them currently earn $75 per month. The last time they increased this wage it was by $3 and this is after a period of three years.”

The PAAWUZ secretary-general said the current wages on the farms are a mockery of black empowerment.

“It was like this in Rhodesia and 37 years into independence the same slave wages continue to be paid to farm workers who till the land day in day out.

“The problem now is that black farmers and white farmers are both paying this wage. Sadly even the little that they are supposed to be paid is not coming. We have several cases at the courts where farmers have not been paying farm workers.

“We have a number of politicians who are defaulting on paying farm workers while some white farmers are being protected. As a union we have written to the minister of Labour about all these issues and we will not rest until it is resolved.”

The recent study by ZCTU research think-tank, the Labour and Economic Development Research Institute of Zimbabwe (LEDRIZ), concluded that thousands of workers in Zimbabwe are working in “modern slavery” without getting salaries.

The research noted that local authorities and parastatals are the major perpetrators with the highest number of employees who worked for nothing for an average period of nine months but their executives lived lavishly, earning thousands in allowances and benefits.

It indicated that between 2015 and 2016 22 778 workers in 20 urban local authorities had not received their salaries. About 7 500 workers had gone for 14 months without pay at the State-controlled National Railways of Zimbabwe, 4 600 in the clothing sector, 3 720 in medical and pharmaceutical companies.