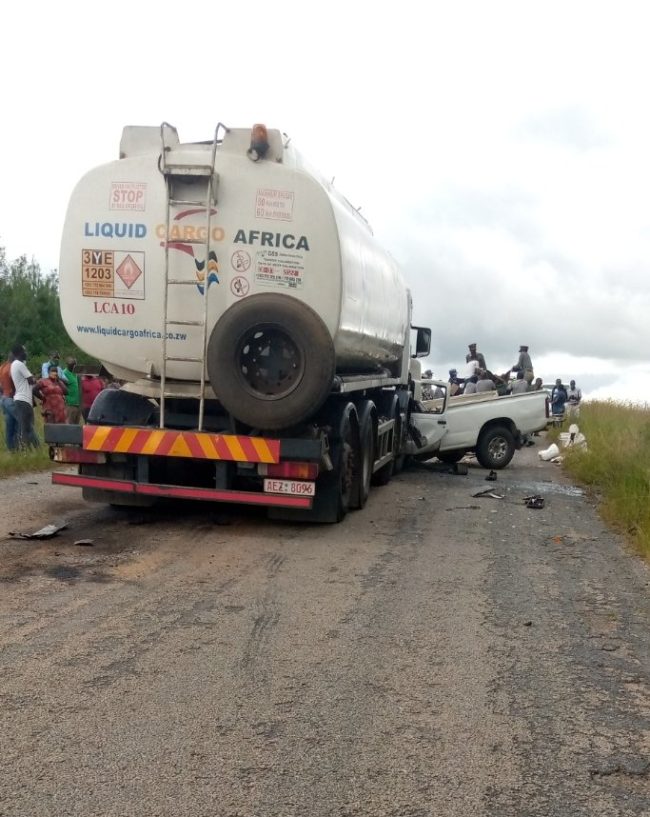 BY KENNETH NYANGANI
FOURTEEN people died in two separate road accidents that occurred in Nyanga and Mt Darwin today.
The Nyanga accident involved a Zimbabwe Prisons and Correctional Services (ZPCS) truck which collided with a fuel tanker near Honde Valley turn-off along the Nyanga-Mutare Highway.

“I can confirm that seven people died around 11am today (yesterday). Four of the deceased were ZPCS officers, while one was a prisoner and two were ordinary citizens,” Nyathi said.

“Several other people were and have been ferried to Mutare Provincial Hospital. The identities of the deceased will be announced once their next of kin are informed,” he said

In the Mt Darwin accident, two cars that were involved in a speed race in Mt Darwin, Mashonaland Central province, mowed seven pedestrians to death.

Bloody Day
7 people perished in a head-on collision in Nyanga today. The accident involved a ZPCS truck and a Liquid Cargo truck. The deceased are said to be prisoners and officers who were going to attend court in Nyanga. Two other people also lost their lives. MTSRIP pic.twitter.com/4wYadxdgQg

“Two cars racing each other mowed down seven people to death in an RTA [road traffic accident] at Goora Business Centre on the Bindura-Mt Darwin Highway. All seven were pedestrians who had just alighted from a kombi on their way from prayers. A well-known gold buyer is involved,” he tweeted.

Mt Darwin
2 cars racing each other mowed down 7 people to death in an RTA at Goora Business Centre on the Bindura- Mt Darwin Highway. All seven were pedestrians who had just alighted from a Kombi, on their way for prayers. A well-known gold buyer is involved.