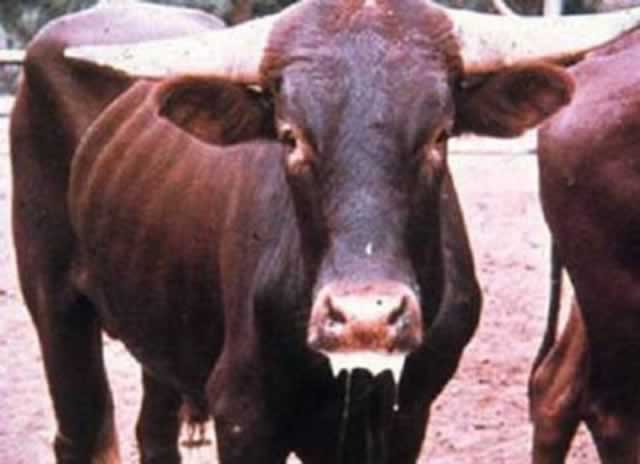 Cattle affected by the disease

Government has secured 178 000 doses of vaccines for foot-and-mouth disease (FMD) to help contain outbreaks in the country, a senior state veterinary official said.

Dr Jairus Machakwa, director of Veterinary Field Services in the Ministry of Lands, Agriculture, Fisheries, Water and Rural Resettlement, told the Herald recently that his department had sourced FMD vaccines worth US$445 000 to ensure that the infectious disease does not spread in the country.

“We have adequate stocks of the FMD vaccine and we stand ready to respond to any outbreaks in major hotspots in the country,” he said.

“At present there are no reports of FMD outbreaks and we remain alert to any reports. We are safe for now and we are prepared to deal with any cases of the outbreaks.”

Namibia has been hit by another outbreak of highly contagious foot and mouth disease after the detection of infected cattle in the northern regions of Oshana and Ohangwena, according to media reports.

Dr Machakwa said his department continued to conduct surveillance across the country to curb the spread of the disease both within and from neighbouring countries.

FMD is the most contagious disease known to cattle. The disease, which does not affect humans, causes lesions and lameness in cattle and sheep.

The disease is caused by a virus and is spread mainly through cattle to cattle transmission.

In Zimbabwe, it is mainly spread by illegal animal movements.

Zimbabwe’s prized free – range and hormone – free beef is on demand in the lucrative Chinese, European Union and other countries in the region, but the sector is still to capitalise on the opportunities owing to the stringent phyto-sanitary standards in some of these markets

Dr Machakwa said FMD is a very sensitive economic disease that has the potential to devastate the country’s meat exports.

Local exports of fish, meat and edible meat offals amounted to US$8,4 million in 2019, much lower than previous exports to lucrative European markets, particularly the United Kingdom, Germany and Netherlands, according to Zimstat.

Currently, the major market for local meat is Zambia, which imported products (79% of the country’s fish exports) worth US$5,1 million last year, followed by Mozambique which imported US$1,2 million worth of beef in 2019.

Last year, exports of meat and edible meat offals to Mozambique were US$1,1 million, while fish exports were US$100 000.

At its peak, Zimbabwe’s beef cattle herd topped 1,4 million and raked in about US$50 million yearly from exports to the European market.

The Government is currently working to rehabilitate the Cold Storage Company (CSC), which at its peak used to handle up to 150 000 tonnes per annum of beef exports and other by-products.

The beef and leather industry has in the past few months engaged the European Union (EU) Ambassador to Zimbabwe, Timo Olkkonen to explore ways of retaining the lucrative EU market.

Zimbabwe’s beef sector needed to improve its standards for it to be competitive for European markets.

Apart from the lucrative EU and Chinese markets, the African region also has a major potential.

According to the Trade Map, African countries imported meat worth US$5 billion in 2019.

African countries that are leading in beef imports as of 2019 and offering opportunities for Zimbabwe are Egypt (US$1,5 billion), Algeria (US$74 million) and Angola (US$45 million).

To protect and safeguard its million –dollar meat industry, Zimbabwe needs to continuously fight the spread of the foot and mouth disease through improved quarantine measures and restricted movement of animals in affected areas.