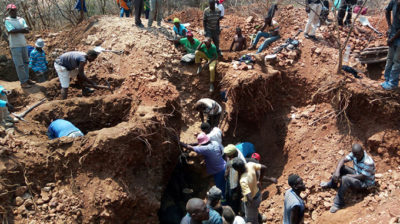 TWO illegal miners died on Sunday in two separate incidents in Mazowe, Mashonaland Central province after falling in pits at disused mines while prospecting for gold.

“I can confirm two cases of sudden death of illegal miners in Mazowe on Sunday, one at Masasa Farm and the other at Mazowe Citrus Farm, where two miners who were prospecting for gold died,” he said.

Allegations are that Nicholas Mombeyarara (22) of Guruve, who was in the company of three friends, fell into a 12-metre deep disused shaft and sustained head injuries.

He was retrieved by his friends and died on the way to Concession Hospital.

Another illegal miner, Vengai Mutanhaunga (23) of Mazowe Citrus Farm, went to Hermgene Gold Mine to prospect for gold around midnight.

A security guard, Temba Nyamukondiwa, saw him and gave chase.

Fearing arrest, he ran and jumped into a pit filled with water and
drowned.

A witness told NewsDay that water had to be pumped out of the pit to retrieve Mutanhaunga’s body.

“When we saw that Mutanhaunga had drowned, we pumped out water to retrieve the body and police took the body to hospital,” the unnamed witness said.

Police have warned people to desist from illegal mining and not trespass into other people’s gold mines to prospect for gold.