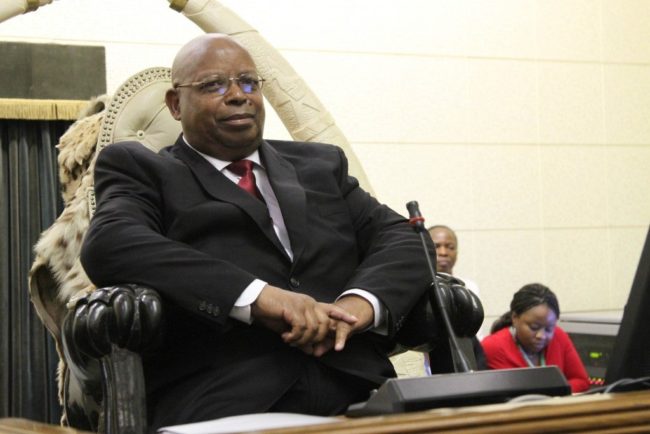 THE Parliament of Zimbabwe sessions in 2019 were chaotic and less productive due to continuous electioneering mode by MPs, and partisan interests taking precedence over serious issues affecting the suffering Zimbabweans, who live on less than US$1 per day.

While Parliaments the world over have spats that turn nasty along political lines, in Zimbabwe, the economy in comatose, people expect Parliament to be more proactive in suggesting solutions to the country’s economic malaise.

Despite MPs lacking industriousness in 2019, they, however, successfully lobbied for an increase to their sitting allowances from $75 to $700 per sitting.

The lowest paid civil servant earns $1 000, so by Zimbabwean standards, their $700 per sitting allowance is quite a lot for MPs who spent time squabbling throughout 2019.

The worst squabble of 2019 in Parliament was by members of the Mines Portfolio Committee.

MPs were captured on video threatening each other with death. The video circulated worldwide.

Chegutu West MP Dextor Nduna (Zanu PF) traded barbs with Norton MP Temba Mliswa (independent) and they nearly went into a fist fight as he threatened Mliswa after he (Mliswa) alleged that Nduna was involved in an $11 million Zimbabwe National Road Administration (Zinara) scam when he was Transport Portfolio Committee chairperson during the Eighth Parliament.
In his threats to Mliswa, Nduna claimed that he had murdered people before.

Before Nduna threatened Mliswa, there was also trading of barbs between Chiredzi North MP Royi Bhila (Zanu PF) and Mliswa.

Bhila had suggested that Mliswa be recused as chairperson of the Mines Committee.

Bhila’s suggestion angered Mliswa, who hit back by referring to him as “dull”, adding that he was hallucinating because he (Bhila) did not take his anti-retroviral medication.

Analysts viewed this as a ploy by Zanu PF to disrupt sittings of the Mines Committee during the chairpersonship of Mliswa, who was exposing bigwigs by investigating the diamonds saga and the Hwange Colliery saga.

The hostilities between Zanu PF and MDC that ended up disturbing the committee sittings began during the official opening of the Second Session of the Ninth Parliament in October 2019 when the opposition refused to recognise President Emmerson Mnangagwa.

As per Parliament decorum, they did not stand up as Mnangagwa’s procession walked into the House. As soon as the President began to deliver his State of the Nation Address (SONA), they walked out as a show of disdain towards him.

This was purely a political decision by the MDC which was decided during their congress that they will not recognise Mnangagwa as President.

It was based on the premise that they felt he stole the 2018 elections from their party president Nelson Chamisa. MPs from the MDC where then whipped into snubbing Mnangagwa’s addresses in Parliament.

To punish them, Speaker of the National Assembly, Jacob Mudenda then made a ruling that Finance minister Mthuli Ncube must not pay the opposition legislators five months’ worth of sitting allowances.

This translated to the opposition MPs losing almost $15 000 each.

This ruling has been challenged in the courts by the opposition. However, to add fuel to the fire, Justice minister Ziyambi Ziyambi then refused to take questions from opposition MPs in Parliament, which further derailed progress in debates in the House and affected questions time.

Parliamentary committees were in different stages of investigating different malpractices by government departments as part of their oversight roles when they were disrupted by Zanu PF and MDC political squabbles pertaining to the opposition’s refusal to recognise Mnangagwa as President.

Of note was the disruption of the Public Accounts Committee (PAC) led by Harare East MP Tendai Biti, which undertook an investigation into the 2017/18 Auditor-General’s audit report on the Ministry of Finance, which misappropriated billions of dollars without Parliament’s approval.

The other notable investigation by PAC was on Zinara’s malpractices pertaining to ignoring tender procedures and poor crafting of contracts which cost the company millions of dollars.

All these investigations were derailed due to Zanu PF and MDC’s political squabbles. Zanu PF then decided to hit back at the MDC by disrupting portfolio and thematic committees chaired by the main opposition.

The two disrupted the PAC meeting which had summoned Fertiliser, Seed Grain boss Steve Morland, Croco Motors and Pedistock bosses to give oral evidence on how they benefited from the Command Agriculture and Presidential Input Scheme funding programmes.

Nduna and Zhou were in 2018 also instrumental in disrupting the sitting of the Mines Committee when it was investigating the mismanagement of the Hwange Colliery Company. The committee was then disbanded.

The disruptions were at times done in the presence of witnesses. Some of the witnesses would have travelled long distances to avail themselves for questioning in Parliament, but had to be turned back due to the MPs’ squabbles.

The disruptions have cost taxpayers as MPs travel to Harare and are booked at hotels for Parliament sittings. They also draw allowances for attending committee meetings.

Many witnesses had travelled to Harare at their expense to avail themselves to give oral evidence before committees, but were turned away after MPs began to shout at each other.

Independent power producers from different parts of the country were some of those who availed themselves before the Energy Committee, but they were turned away due to the MPs’ squabbles.

Generally, before the squabbling began, the MPs were well behaved during committee sittings and would grill witnesses without taking a partisan stance. At committee meetings, MPs have been very vibrant than during sittings of the House.

Infamous rulings on the opposition by the Speaker

After the main opposition continued to walk out or snub Mnangagwa whenever he availed himself before Parliament and Mudenda made a ruling to cut MDC Alliance MPs’ sitting allowances for five months, the Standing Rules and Orders Committee then instituted a nine-member Privileges Committee made up of eight Zanu PF MPs and one MDC-T MP Priscilla Misihairabwi Mushonga (proportional representative), who, however, refused to be part of the committee to investigate the MDC Alliance MPs for snubbing Mnangagwa. The committee is now composed of eight Zanu PF legislators only.

The MDC Alliance on December 17 then confronted the Speaker of the National Assembly Mudenda in the House and accused him of being biased in favour of Zanu PF legislators in his rulings, which have been very hard-hitting on opposition MPs.

Nkulumane MP Kucaca Phulu (MDC Alliance) bluntly told Mudenda that he would not be subjected to appear before a privileges committee set up to investigate MDC MPs for snubbing and walking out on Mnangagwa because the committee was unfairly made up of Zanu PF MPs.

Mutare Central MP Innocent Gonese (MDC Alliance) accused Mudenda of bias, saying: “I will refer to Parliament conventions, practices and procedures that when a person occupies the office of Chair, Speaker or President, that person — for the duration or period they are in occupation of that office, is supposed to be impartial. I am making this point as I feel that my rights are infringed in the manner that the Chair has been responding to issues with bias in favour of ruling party MPs.”

Mudenda responded: “Let me remind you that I and my team of presiding officers have to observe balance in this House, where the ratio is 3:1. On a more serious note, we need to observe that ratio. You must understand the numerical ratios. You must know that when you have four wives, there is a senior wife and three others. Polygamy is a problem.”

While MPs have been squabbling a lot, they were serious in terms of crafting of Bills and they contributed immensely. However, not all MPs are vocal in the House. One can say that almost the same MPs who are vocal have been contributing to debate on motions and Bills while the rest are just bench warmers.

Dzivarasekwa MP Edwin Mushoriwa (MDC Alliance) can be credited for being very vocal during debate on the 2020 budget, whereby he scrutinised different clauses. That is not to, however, say that other MPs did not take part in the budget debate, but Mushoriwa showed commitment to his duties of budget oversight as an MP.

Most Bills brought before Parliament for scrutiny by MPs in 2019 were to do with aligning laws to the Constitution. MPs were very industrious in crafting of Bills in both Houses.
Some of the laws that are in different stages of being crafted include the Freedom of Information Bill, Marriages Bill, International Treaties Bill, Veterans of the Liberation Struggle Bill, Constitutional Court Bill, the Reserve Bank of Zimbabwe Amendment Bill, which was later withdrawn and the Zimbabwe Media Commission Bill.

On debate on motions, the performance of MPs in 2019 was very disappointing. For instance, the National Assembly Order Paper was awash with several new motions that MPs moved that they would introduce in the House, but they were never introduced, while in most cases, the House adjourned by 5pm.

Most of these motions that were never discussed were supposed to discuss the economic problems affecting the country.

The motion that was extensively discussed was one in reply to the Presidential Speech during the official opening of the Second Session of the Ninth Parliament and the SONA. This motion was debated by Zanu PF MPs in the National Assembly and the Senate.

Disappointingly, the quality of debates to this motion was largely poor because of ruling party MPs’ tendency to sing praises only to the President without meaningfully scrutinising his speech.

The MDC Alliance snubbed debate on the Presidential address. However, although they also did not attend the 2020 National Budget presentation, they attended the Victoria Falls jaunt, where MPs were booked at the luxurious Elephant Hills Hotel, which costs US$248 per night and they dined with Zanu PF MPs during the pre-budget seminar.

During Parliament sittings, some of the remarks by male MPs have been quite distasteful, particularly pertaining to degrading females in Parliament by labelling them prostitutes.

There are some Zanu PF legislators who sit at the very far back benches in the National Assembly who have been identified by female MPs as notorious for the labelling female MPs as prostitutes.

“Women in this Parliament are now becoming unproductive due to GBV suffered here and, as such, we ask your office to protect us and take stern measures against all male MPs that use verbal GBV against us,” Rwodzi

said.
Toffa added: “For example, there is an incident happening to myself whereby last week in the presence of the Justice minister Ziyambi, an MP abused me and he shouted alleging that my man was snatched from me by Mamombe. As I speak, I am actually looking at those MPs. It ends up attacking the confidence of female MPs.”