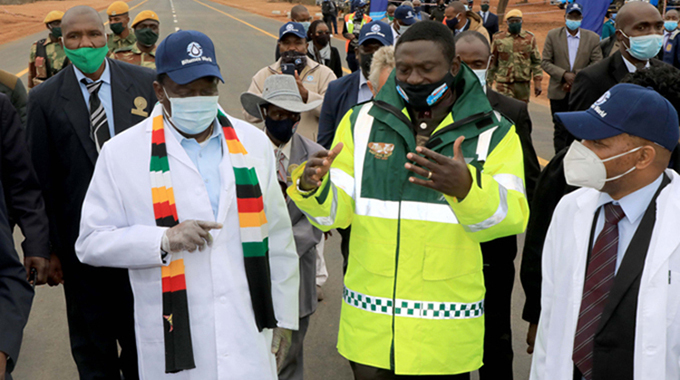 We are not yet out of the woods with regards to this disease, but there is hope and optimism that 2021 will bring better tidings.

Although Covid-19 played some tricks on the country, it was not all doom and gloom when it came to the implementation of developmental programmes.

If I was allowed to name 2020 in developmental terms, I would call it “The Anchor of Development in Zimbabwe”.

For it was indeed the year in which the country set the base for future development and made all the fundamentals right as a prerequisite for a massive take-off in development.

This is, especially with the country’s Vision 2030 of achieving an upper middle income economy in mind.

While the Transitional Stabilisation Programme (TSP) that was launched in 2018 contained many objectives, one of the most outstanding was the stabilisation of the foreign exchange rate and ultimately prices.

The forex auction system was introduced on June 23, with the aim of fighting the exchange rate instability, ultimately leading to the discovery of the market determined exchange rate.

Being held every Tuesday, the auction system has proved workable as the exchange rate is now hovering around US$1: $81. This stability, as official foreign currency users turn to the auction, has killed off the forex parallel market, which had been blamed for rising prices of goods and services.

Massive roads rehabilitation works that started at the take-off of the New Dispensation were consolidated in 2020, with completion of some or parts of the projects. The anchor of these road works has been the Harare-Beitbridge Highway, which has started to witness a major overall and a fresh outlook.

Already, the first 100 kilometres of the rehabilitated and widened highway have been commissioned, with the local contractors earning plaudits for successfully executing the job in a move that dovetails with Vision 2030.

At least a cumulative 200 kilometres is expected to have been completed by now, with the entire stretch from Harare to Beitbridge to be ready for use in 2022.

Rehabilitation work is also underway on sections of the Harare-Chirundu Highway, where engineers are employing the latest technologies in road construction. Many other roads in various provinces underwent rehabilitation in various parts of the country as 2020 progressed.

It was in 2020 that the country finally launched the Zimbabwe Investment and Development Agency (ZIDA), a fully-fledged one-stop-shop investment agency.

President Mnangagwa officiated at the launch of the investment agency this month. ZIDA is tasked by the enabling law to deal with all issues concerning both local and foreign investors and it is expected to help turn the country’s fortunes.

Another milestone recorded in 2020 was the acceleration of the devolution process, as the New Dispensation set in motion one of the key pillars for development. In 2019, Treasury availed $703 million in the National Budget towards devolution, while the figure increased to $2,9 billion in this year’s budget.

Rural and urban councils which received the funds embarked on various projects within the guidelines from the central Government.

Schools, clinics and dams were built in various areas, while roads, water and sewer works are being carried out throughout the country using the funds disbursed under devolution.

Work on power projects was speeded in 2020, with work being undertaken in Hwange alone going to ensure the country generates in excess of 6 900MW of power by 2023. This will make the country self-sufficient in electricity and an exporter to regional countries.

The expansion of Hwange Unit 7 and 8 is on course, while other projects in the area include the Zambezi Gas and Coal to generate 750MW and the Western Areas which will input 600MW.

In the same Hwange area, Jinan will generate 600MW, Tsingshan will have 100MW and the Zimbabwe Zhongxin Electrical Energy will contribute 430MW.

President Mnangagwa toured projects in Hwange during the course of the year and was impressed by the work being done in the area.

Government is also reviving the Bulawayo and Harare Power stations and upgrading the whole electricity distribution infrastructure throughout the country. A number of solar projects are being implemented in various parts of the country and are expected to contribute at least 300MW to start with.

The New Dispensation managed to attract a number of investors in mining, who are set to contribute to the sector becoming a US$12 billion industry by 2023. In this category, you talk of the Great Dyke Investment (GDI) platinum project and the Karo Resources platinum mine, both in Mashonaland West.

Australia Stock Exchange-listed concern, Invictus Energy, obtained an Environmental Impact Assessment (EIA) from the Environmental Management Agency (EMA), which allowed the company to move on the ground at its Muzarabani oil and gas project.

All attention was drawn to Victoria Falls in 2020, where massive initiatives that will make the area a hub for development in Zimbabwe were put in place.

It all started with President Mnangagwa launching the National Tourism Recovery and Growth Strategy in the tourist resort.

The strategy will encourage investment in the tourism sector, making Zimbabwe a favourite destination among tourists, thus achieving the envisaged US$5 billion tourism economy by 2025. The area was then designated as a financial hub and a special economic zone, where investors in the financial sector are expected to sat base.

This will be supported by the Victoria Falls Stock Exchange, which started operating along the year following the gazetting of Statutory Instrument 196 of 2020. Then, Cabinet adopted a report on the operations of Mosi-Oa-Tunya Development Company, an investment vehicle for Government in the development of tourism facilities in the resort town. The company is already working with a private sector concern to conduct feasibility studies for the proposed Victoria Falls Integrated Tourism Park in Masuwe Estate. This project will result in the building of hotels, shopping malls, a medical facility, a convention centre and an upmarket golf course.

The icing on the cake was when President Mnangagwa conferred city status on Victoria Falls this month.

Marovanyati Dam was commissioned by President Mnangagwa this year, and it is expected to change lives in the dry Buhera district through the establishment of irrigation schemes.

Overall support for dam projects amounted to $10,7 billion, with focus on Gwayi-Shangani and Chivhu dams that are targeted for completion during 2021.

Causeway Dam in Mashonaland East has been physically completed, while work on other dams like Bindura, Dande, Tuli Manyange, Semwa and Silverstroom is supported by funding from the fiscus.