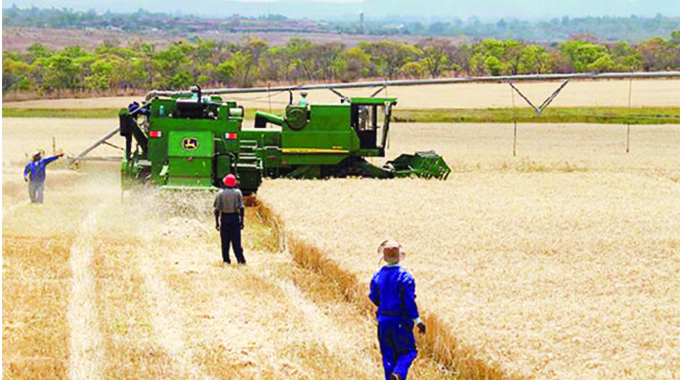 A target of 340 000 tonnes of wheat has been set for the coming winter cropping season, the first time since commercial wheat farming started in the 1960s.

Targeted tonnage is going to meet national requirements and rule out imports.

Rising from a trivial 1 tonne a year, irrigated wheat farming started in 1966 when 10 tonnes were grown but after fairly fast growth tended to settle, even in the best years, at below 300 000 tonnes and at times when irrigated water was short at below 200 000 tonnes.

The Zimbabwe National Water Authority (ZINWA) has indicated that major dams have water capable of irrigating more than 230 000 hectares, so the target is achievable.

“An exciting winter cropping season is beckoning. Today’s cereals indaba is coming at a time when the country has received abundant rains.

“This is the second best season in 51 years, since 1970. Lake Tugwi-Mukosi spilled for the first time since commissioning in 2017, while the second largest, Lake Mutirikwi, has surpassed the 95 percent mark. Dams in all seven catchments are at an average 92 percent full.

“We are in a history making phase. Together we can transform agriculture and do so much more. We have envisaged that we will be able to put 85 000 hectares under winter wheat this year. This is unprecedented in the history of our country,” Dr Masuka said.

“We are starting from gardens, vleis and irrigation schemes so that we will be able to produce 340 000 tonnes of wheat.

Government through the Agriculture and Food Systems Transformation Strategy and the Accelerated Irrigation Rehabilitation and Development Plan targets to put 350 000ha under irrigation in the next three seasons to climate-proof agriculture as the country is predicted to become drier in the decades ahead.

“This should spawn opportunities for value chain actors, from research and development for innovative methods and ways to modernise irrigation systems, to manufacturing and input suppliers, to farmers who should be excited that they will have better control of their production leading to increased production, higher productivity and enhanced profitability,” he said.

“Irrigation will continue to have a prominent role in propelling agriculture in the context of Vision 2030. In this regard, efficient water use, through efficient irrigation systems, must be advocated,” he said.

“Water availability for different winter wheat clusters points to the adequacy of water to embark on a successful winter cropping and next summer cropping.

“Major dams can support a potential hectarage of 184,582 hectares. Other small dams and private water sources can support 46,356ha giving a total of 230,938 ha.

“However, there is a significant gap between the functional irrigation schemes (approximately 174,500ha and the developed water resources.

“The expected development of the 350,000ha under the National Development Strategy 1 (NDS1) is going to address this gap,” he said.

The ministry recently indicated that most Grain Marketing Board (GMB) depots had inputs ready for collection while enough Compound D and seed were available with supplies of ammonium nitrate almost adequate.

Last season, farmers produced wheat that is enough to cover nine months’ supply to meet domestic demand, a major jump, with GMB receiving 156 144 tonnes from the farmers it had under contract and around 95 000 tonnes grown by the rest of the wheat farmers to give a total harvest of over 250 000 tonnes.