3 bodies retrieved from disused mine

A TEAM of rescuers yesterday retrieved three bodies of four artisanal miners trapped in a disused mineshaft at Young Mine in Esigodini, Matabeleland South. 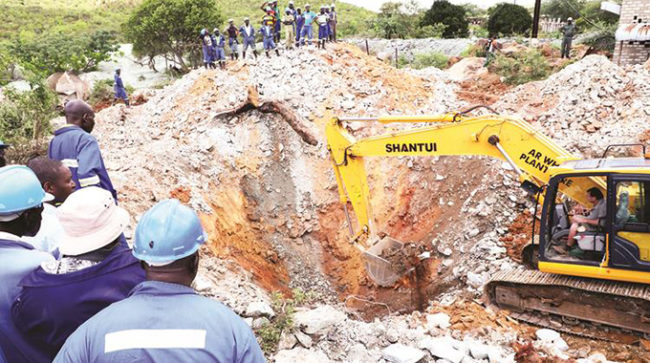 Four artisanal miners, aged between 41 and 86 years, were buried underground on Tuesday morning at Young Mine when the surface beneath their ironsheet cabin weakened and collapsed into a disused mineshaft.

Matabeleland South provincial mines deputy director Khumbulani Mlangeni said: “We have retrieved three bodies since morning and they have been accounted for. The rescue operation is underway and it is difficult to tell if by the end of the day we will have managed to account for the other person.”

Zimbabwe Miners Federation (ZMF) spokesperson Dosman Mangisi said a team of rescuers from the Mines ministry, in partnership with those from How Mine and other stakeholders, were involved in the retrieval exercise.

In February, 24 illegal miners died at Battlefields Mine, 175km west of Harare when underground shafts were flooded by rain water.

The post 3 bodies retrieved from disused mine appeared first on NewsDay Zimbabwe.