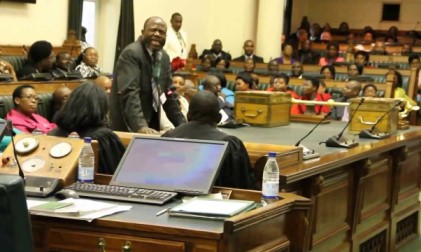 HARARE – Thirty-five MPs from the eighth Parliament who failed the House’s audit of the Constituency Development Fund (CDF) will be denied access to the same in this session’s CDF allocation, Parliament announced on Tuesday.

The country’s Legislature undertook to embark on an exercise to audit the CDF in a development that was hailed as one of the most progressive actions by the august House in years.

Acting National Assembly Speaker William Mutomba announced that 35 legislators were ineligible to apply for the 2018 CDF.

He announced that for those who have complied with the CDF provisions, their allocation for 2018 is now ready for disbursement.

In terms of Article 14 of the CDF constitution as read together with Article 18 of the Accounting Officers’ manual, the Constituency Development Committees are required to submit their returns to Parliament on a quarterly basis.

It provides that no new applications for fresh CDF disbursements would be considered before the completion of the audit of funds released for the eighth Parliament, an exercise which was expected to be completed around July.

Mutomba did not, however, disclose the names of the concerned legislators.

The decision to audit the funds was viewed by many as signalling seriousness towards achieving accountability — for long one of the biggest handicaps inherent in State institutions.

The fund was first introduced by former Finance minister Tendai Biti in 2010 during the tenure of the stability-inducing inclusive government when former president Robert Mugabe entered into a unity government with his long-time foe, the late MDC leader Morgan Tsvangirai between 2009 and 2013.

A year after CDF was unveiled; it collapsed due to budgetary constraints and the absence of a legal framework to govern it.

A number of MPs had been accused of abusing the fund, which was meant for the express development of the constituencies they represented in Parliament.

Ironically, Zimbabweans are reeling under the weight of several challenges among them fuel and cash shortages, poor road network and other communication infrastructure, shortages of drugs in health facilities and a struggling education sector, areas which need urgent injection of funds to breathe life into them.

At some point last year, even nonconstituency MPs applied to get access to the fund in a curious development that smacked of greed.