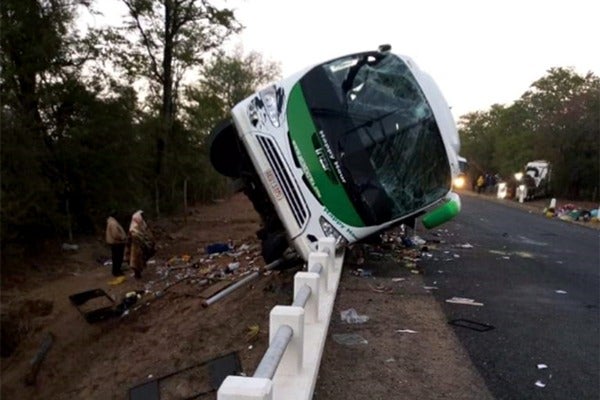 THIRTY-EIGHT people were injured when a Munenzva bus they were travelling on veered off the road and landed on roadside guardrails at the 140km peg along the Beitbridge-Masvingo Road on Tuesday.

“I can confirm that a 69-seater bus towing a trailer, which belongs to Munenzva Bus Company was involved in an accident at the 140km peg along the Beitbridge-Masvingo Road on Tuesday midnight,” Mazula said.

“It had 63 passengers on board and was travelling from South Africa to Masvingo. The driver of the bus, Tinosengwa Vengai, lost control of the bus at a bridge and it veered off the road and landed on the rails in the process, with 38 people incurring minor injuries.

“We advise drivers to rest in order to avoid fatigue.”

In an unrelated matter, police in Bulawayo this week recovered a stolen vehicle after receiving a tip-off from the public.

‘’We received information that Phathisani Nkomo was driving a Nissan twin-cab with one registration number plate which read AEV 960. After verifying with the Central Vehicle Registry (CVR), we discovered that it was a fake number plate and the vehicle belonged to Nissan Tiinda, whose owner is in Harare,” he said.

“Nkomo revealed that he bought the car in Harare after swapping it with a single cab and topped up with US$11 500. The value of the stolen vehicle is US$43 000.”