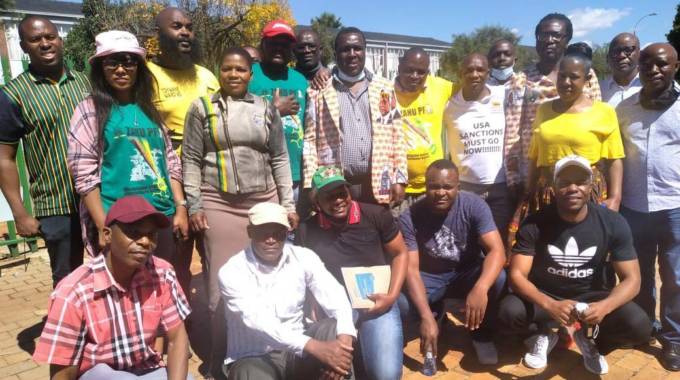 JOHANNESBURG, (CAJ News) — MORE than 40 Zimbabwean youths in neighbouring South Africa have enrolled at the Herbert Chitepo School of Ideology aimed at instilling patriotism among youngsters.

A three-day programme that ended in Kempton Park east of Johannesburg yesterday also provided a platform for the ruling parties of South Africa and Zimbabwe (ANC and Zanu-PF) to solidify their decades-long relations.

“In South Africa, we also have our own school of ideology called O.R. Tambo School of Leadership”.

He said the people of Zimbabwe and South Africa shared an identity and similar aspirations.

“Our youths today trust more foreigners (whites) as opposed to their own black brothers and sisters. This is so because they lack this crucial ideological and historic understanding,” Mashamba said.

Kennedy Mandaza, the Zanu-PF spokesperson in South Africa, said the response to the school in the neighbouring country was encouraging.

“Interestingly, there are some members of opposition parties (MDC-Alliance) among those that have been in the orientation, who participated strongly, and even joined ZANU-PF later,” said Mandaza.

“The aim of the Herbert Chitepo School of Ideology is to make sure that we have ideological, intellectual and politically conscious cadres that are able to pursue the vision of the party (ZANU-PF) and the vision of the country (Zimbabwe) as well,” Mandaza added.

Velile Mguni, the ZANU-PF South Africa Secretary for Security, told CAJ News Africa that the Herbert Chitepo School of Ideology taught people in the Diaspora and back home to be patriotic.

“When you (people) are true Zimbabweans, then you become patriotic. Black Zimbabweans were oppressed before, whether they came from Matabeleland or Mashonaland,” Mguni said.

He said the school did not segregate people from other political parties.

“Therefore, we (ZANU-PF) call upon all Zimbabwean people to come together with one love, same understanding, preach peace and unity so that we do away with divisions.”

Mguni called for unity among all Zimbabweans as displayed during the liberation war. “This is the reason why the Herbert Chitepo School of Ideology is playing a pivotal role in uniting the nation, defend the country’s interests, as well as preaching peace, unity, love and sovereignty,” he told CAJ News Africa.

One of the participants, Tendai Mago, said the orientation programme inculcated patriotism.

“The Herbert Chitepo School of Ideology helped me understand my country’s history, wars that were fought before and why they were fought,” she said.

“Even today, enemies of Zimbabwe are still fighting the motherland for taking back the stolen land by whites hence these illegal sanctions by the US”.

Herbert Chitepo led ZANU until he was assassinated on 18 March, 1975 in Lusaka, Zambia at the height of the liberation war that freed Zimbabwe in 1980.

He became the first black citizen of the then-Rhodesia to become a barrister.