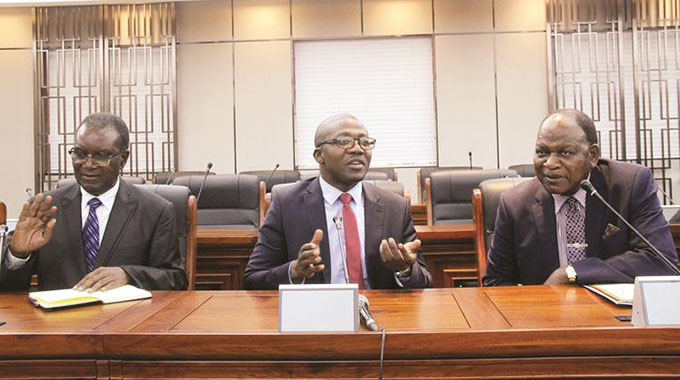 The Minister of State for Presidential Affairs and Monitoring Implementation of Government Programmes presented to Cabinet the Priority Projects under the Fourth 100-Day Cycle, which commenced on 16 September, 2019 and will end on 24 December, 2019.

A total of one hundred and one projects were submitted by nineteen Ministries.  The Infrastructure and Utilities, and the Social Development pillars had the largest number of projects, which is a reflection of the Government of the Second Republic’s focus on projects with the highest impact on the livelihoods of the people.

Under the Infrastructure and Utilities Pillar on projects intended to improve access to electricity, Cabinet approved the construction of the 132/33 kilovolt 85 km transmission line for the Karoi and Alaska sub-stations; the manufacture of 210 transformers to meet ever increasing demand; the installation of 2 700 smart electricity meters; and the electrification of 35 institutions in the rural provinces of Zimbabwe.

Under the Social Development Pillar, Cabinet approved the training of 15 agencies and organisations countrywide on customer care; the establishment of 8 community fishing ponds at various schools in Mashonaland East Province; the installation of two biogas digesters in Masvingo and Bubi; and the establishment of centres of excellence or super specialist hospitals at United Bulawayo Hospitals, Mpilo, Chitungwiza, Parirenyatwa, Harare Central and Victoria Falls hospitals.  In addition, solar projects shall be undertaken at Chitungwiza Hospital and at four other health institutions in Gokwe, Midlands Province.

The full compendium of projects approved by Cabinet, including under the Macro-Economic Stabilisation and Fiscal Reforms; Governance; Inclusive Growth and Cross Cutting themes will be availed for the information of citizens in due course.

Cabinet received and approved new place and street names as presented by Hon. Vice President K.C.D. Mohadi as Chair of the Cabinet Committee on Place-Names.  Cabinet noted that through the process of naming, every community or society defines its identity and culture, tells its history, and espouses its values, beliefs, norms and worldview.  Naming is also a social engagement tool that fosters understanding, peace and unity in diversity.

Following presentation of the Grain Importation and Logistics Report by the Ministry of Home Affairs and Cultural Heritage as Acting Minister of Foreign Affairs and International Trade.  Cabinet noted the need to ensure the continued availability of essential food stuffs in the market and to counter the effects of the drought that was experienced during the 2018/19 agricultural season.  Accordingly, Cabinet has resolved to implement the following temporary measures:  removal of control of goods import permits for maize grain, maize meal and wheat flour, with immediate effect;  placement of wheat flour on the Open General Import Licence (OGIL) with immediate effect; and suspension of all import duties currently applicable on the following products, as indicated.

Millers and commercial users of grain are also hereby informed that following the pronouncements in the 2020 National Budget, the subsidy on grains has been removed with immediate effect.  In essence all users of grain, including millers, will now buy grains at cost price, which currently stands at ZWL$4 000 for maize and small grains, and ZWL$8 612.08 for wheat, per metric tonne.

Government will also be unveiling a mechanism for targeted subsidies for basic foodstuffs, particularly roller maize meal and bread flour as outlined in the 2020 Budget Statement, once the finer details of the mechanism are worked out.  This is intended as an additional cushion for vulnerable households and the generality of Zimbabweans.  Cabinet therefore wishes to assure the nation that all measures possible will continue to be taken in order to ease the challenges of accessing food by all Zimbabweans.

Cabinet received a detailed report on His Excellency the President’s recent visit to Dubai, United Arab Emirates, which the Minister of Finance and Economic Development presented.  The visit followed an invitation extended by the Vice President and Prime Minister of the UAE, His Highness Sheikh Mohammed Bin Rashid Al Maktoum.

It is significant that His Excellency the President’s delegation comprised at least 25 business persons from Zimbabwe, as this resonates with the Second Republic’s focus on efforts to revive the economy through engagement and re-engagement.  Indeed the message taken to the UAE was   “Zimbabwe is Open for Business”.  Cabinet was informed that the Business Forum focused on entrepreneurship; tackling Africa’s challenges in business; enhancing innovation in agriculture and the rebuilding of food supplies; trade and investment facilitation; and power generation.

It will be recalled that earlier in the year, the United Arab Emirates donated a huge consignment of medical equipment and drugs for the benefit of Cyclone Idai victims as well as a number of our health institutions.  As relations with the UAE continue to scale new heights, Zimbabwe has appointed its first Ambassador to the oil-rich nation, and plans to set up an embassy in Dubai have made significant progress.  Zimbabwe’s Ambassador is due to present his credentials to the UAE President today.

Immense benefits from President E.D. Mnangagwa’s visit abound for bilateral cooperation in sectors encompassing agriculture and agro-processing, mining, tourism, energy; infrastructure and services; and free trade zones.  An opportunity was therefore taken during the visit to articulate the opportunities of doing business in Zimbabwe, including in the area of small and medium and start-up enterprises.  A lot of facilitation is being arranged in this regard.

Cabinet was further informed that the Dubai Chamber of Commerce and Industry is expected to lead a business delegation of potential investors from the UAE to Zimbabwe in 2020 to scout for business opportunities in various sectors.  Consideration is being made to extend visas at port of entry to citizens of the United Arab Emirates.

The Minister of Health and Child Care updated Cabinet on the industrial action by Public Hospital Doctors and City of Harare Nurses.  The strike by the doctors over conditions of service has now gone beyond 77 days.  Pertaining to the industrial action by Harare City Council Nurses, the situation at the municipal clinics remains constrained as only 70 out of the expected 138 nurses are turning up for duty at the six (6) Municipal clinics.  In order to ease the challenges associated with home based deliveries, the Minister of Health and Child Care has, in conjunction with Harare City Council Health Department, facilitated the opening of Edith Opperman Maternity Clinic.  Nursing staff from Harare Hospital have been seconded to the Edith Opperman Maternity Clinic, which is open for 24 hours.  They will also be working with three Sisters-in-Charge drawn from other City Council clinics.

Cabinet is cognisant that an agreement has been reached between the National Employment Council and the Nurses Trade Union for a salary increment for nurses.  The nurses are therefore expected to return to work soon, but will not be paid for the days that they have not been reporting for duty.  Disciplinary procedures for the striking nurses will definitely be conducted according to the law.

Turning to hospital doctors, a total of 480 disciplinary cases have so far been heard.  An additional 149 doctors were found guilty and discharged, bringing the cumulative total of the doctors discharged to 435.

Cabinet was informed of a meeting which was held on 15th November, 2019 between the Minister of Health and Child Care and representatives from the Senior and Junior Doctors Association.  While positive strides were made at the meeting, with some doctors showing a willingness to return to work, Cabinet has resolved that those doctors already discharged have to apply for re-admission. Government will not rescind its position on the fired doctors.

Regarding accommodation provision for health services personnel, the Minister of National Housing and Social Amenities has informed Cabinet that his Ministry is currently seized with a housing programme to complement accommodation for health workers.