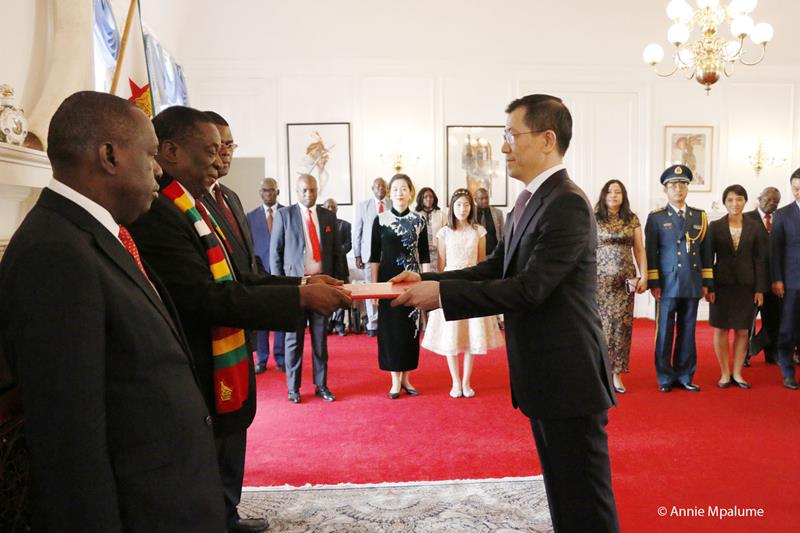 Five new ambassadors presented their credentials to President Emmerson Mnangagwa at State House in Harare yesterday in a genial atmosphere, with all of them looking forward to an improvement in relations with Harare in several key areas.

The diplomats were from The People’s Republic of China, The State of Qatar, Portugal, The Kingdom of Thailand, and The Republic of Indonesia.

The new ambassador-designates were accompanied by their families and government officials from their respective nations.
First to present his credentials to Mnangagwa — who was accompanied by the Foreign Affairs and International Trade minister Sibusiso Busi Moyo — was ambassador-designate Miguel Velozo from Portugal. He stated that he was in Zimbabwe as his government’s envoy primarily to strengthen relations.

Next was the new ambassador of Qatar to Zimbabwe Abduliah H. Al-Jabah. He expressed the will to follow-up on discussions he had with Mnangagwa when he visited Doha last year. Al-Jabah said Qatar was willing to work together with Zimbabwe on projects in the fields of investments, trade and the economy as a whole.

The ambassador-designate of the Kingdom of Thailand Komate Kamalanavin followed next. He was joined by the councillor of the Thailand embassy. He commended Zimbabwe and Thailand’s fantastic diplomatic relations for the past 34 years and was looking for opportunities to expand relations between the two countries in all sectors, especially in the economy, with trade and tourism being key areas. He said Zimbabwe was a beautiful country and wished that the people of Thailand and Zimbabwe connected much more and not just at government level.

The Republic of Indonesia’s ambassador-designate Dewa Made Jiniatra Sastrawan presented his credentials next. He was joined by Indonesia’s respective minister for Political Affairs, secretary of economic affairs among other delegates. He said that Zimbabwe and Indonesia have strong political relations and that it was now time for the two nations to reap the benefits of good economic relations which he was keen on strengthening.

Last to present his credentials was China’s ambassador-designate Guo Shao Chun, who was accompanied by his wife Wang Wei and daughter Guo Yufei. He was joined by his deputy ambassador, the defence secretary and other Chinese delegates.
He was quick to commend the great relationship shared between China and Zimbabwe and said that the relationship has achieved practical cooperation in the last few years and was confident that there was going to be more successful cooperation in the future.
He said China and Zimbabwe have great political trust as the two countries support each other in many important projects. He rounded off by saying China will give a helping hand to Zimbabwe in the wake of the drought that is affecting agricultural produce across many parts of Zimbabwe.