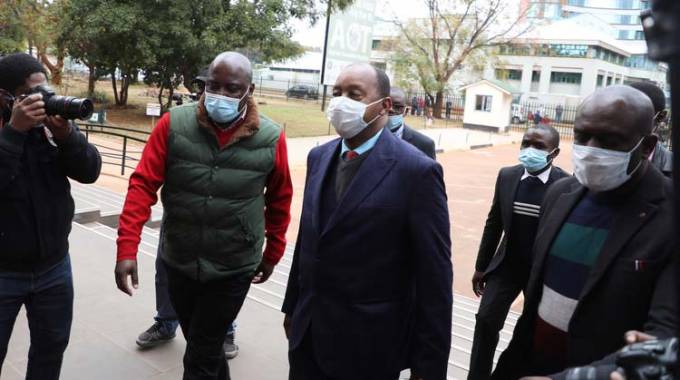 HEALTH and Child Care Minister Obadiah Moyo, who was arrested on Friday on charges of abuse of office, was yesterday released on $50 000 bail when he appeared before chief magistrate Mr Munamato Mutevedzi.

He is alleged to have been involved in NatPharm’s unprocedural contract with Drax International LLC to supply medicines and surgical sundries.

He was remanded to July 31.

Moyo was ordered to reside at his given address, report to the police thrice a week, not to interfere with witnesses, surrender his passport as well as title deeds for his wife’s Eastlea property.

Moyo is facing three counts of criminal abuse of office as a public officer clearly defined in Section 174 (1) (a) of the Criminal Law (Codification and Reform) Act, Chapter 9:23.

On count one, the State alleges that sometime in March 2019, the accused was approached by Delish Nguwaya — a country representative for Papi Pharma LLC — who presented a letter of interest to supply medicines and medical sundries under a US$15 million loan facility.

“After receiving the letter from the company, the accused called the former Permanent Secretary for the Ministry of Health and Child Care, Retired Major General Dr Gerald Gwinji, and told him to process the paperwork and award the tender to Papi Pharma LLC under direct purchase,” reads the charge sheet.

“Acting on the accused’s orders, Dr Gwinji on March 20, 2019 wrote a letter to Treasury requesting that due diligence be taken on Papi Pharma LLC before it is contracted for business by the Government of Zimbabwe.”

It is further alleged that the accused, using his position and influence, verbally directed Dr Gwinji to engage Papi Pharma LLC before a response on due diligence was received from Treasury.

On March 25, 2019, Dr Gwinji is said to have received a response from Secretary for Finance and Economic Development, Mr George Guvamatanga, requesting to be furnished with comparative international prices for the various medicines outlined in the schedule by Papi Pharma LLC.

NatPharm then used direct purchase method on May 29, 2019 and awarded tender number NAT DP 11/19 to Papi Pharma LLC before due diligence was concluded.

On June 14, 2019, an adverse report was received from the Secretary for Foreign Affairs and International Trade, Ambassador James Manzou, indicating that the company and its director, Klodian Allajbeu, were linked to a terrorist group known as Gulen Movement. The State argues that by causing the awarding of a tender and entering into a contract with Papi Pharma LLC, Dr Moyo showed favour to the company, causing a potential prejudice of US$15 million to the Ministry of Health and Child Care.

On count two, the State alleges that Nguwaya, whom the accused had dealt with representing Papi Pharma LLC, visited the accused’s office on August 22 2019 in the company of Ilir Dedja, a legal representative of Drax Consult SAGL.

It is said that during their visit, Delish Nguwaya and Ilir Dedja presented to the accused a letter of expression of interest to supply medicines worth US$20 million under Drax Consult SAGL.

The accused then called the former Permanent Secretary for Health and Child Care, Dr Agnes Mahomva, to his office and handed her the letter of expression of interest for processing.

Dr Mahomva then wrote to Treasury requesting due diligence to be conducted on Papi Pharma LLC.

According to the charge sheet, on September 19 2019, Mr Guvamatanga received a response from the Office of the President and Cabinet to the effect that the business activities of the company could not be ascertained.

Guvamatanga then wrote a letter to Dr Mahomva on September 25 2019 advising against engaging Drax Consult SAGL due to the adverse due diligence report.

The State further alleges that the accused phoned Mr Guvamatanga indicating that new information had been received and that Drax Consult SAGL had been cleared when in fact the company’s activities were yet to be ascertained.

Mr Guvamatanga refused to act on the basis that he had no other information disputing the letter dated September 19 2019.

“The accused, however, exerted pressure on his subordinates, particularly Dr Mahomva to award a tender to Drax Consult SAGL for the supply of medicines to Zimbabwe through NatPharm during meetings he held in his office with officials from Ministry of Health and Child Care, NatPharm and representatives from Drax Consult SAGL,” reads the charge sheet.

The State argues that by causing NatPharm to enter into a contract with Drax Consult SAGL in circumstances where due diligence report was adverse, the accused showed favour to Drax Consult SAGL, causing a potential prejudice to the State of US$17 million.

Acting on the accused’s instruction, Dr Mahomva referred the letter of interest to NatPharm for processing.

“The accused, well knowing that Drax Consult SAGL had not performed fully as per terms of the contract under tender numbers NAT DP 19/19 and NAT DP 20/19, caused another contract to be entered between NatPharm and Drax International LLC under a US$40 million loan facility,” reads the charge sheet.

“This was despite the fact that Treasury had not been involved before the contract was entered into. As a result, Treasury ordered the cancellation of the contract, which was done by NatPharm.”

Under tender number NAT DP 04/20, Drax International LLC supplied Covid-19 test kits valued at US$987 720, which were procured after the contract was cancelled.

It is also alleged that on May 8 2020, the accused phoned Mr Guvamatanga instructing him to write a letter to the Ministry of Health and Child Care to initiate the release of Covid-19 test kits which were held at Robert Gabriel Mugabe International Airport.

The Covid-19 test kits had been supplied under the cancelled Drax International LLC contract worth US$40 million.

On the same date, the accused personally handed over an invoice worth US$987 720 to Mr Guvamatanga.

“Upon visiting the airport, Mr George Guvamatanga discovered that there were around 3 700 Covid-19 test kits which Drax International LLC had exported to Zimbabwe.”

Basing on the invoice, Mr Guvamatanga wrote a letter to Secretary for Health and Child Care, Dr Mahomva, authorising for the release of the Covid-19 test kits subject to review of the prices and reiterated the contract remains cancelled.

“The accused’s actions showed favour to Drax International LLC by causing the awarding of tender number NAT DP 04/20 well knowing that its sister companies, Papi Pharma and Drax Consult SAGL had failed the due diligence process.”

The State, therefore, alleges that it suffered a potential prejudice of US$40 million.