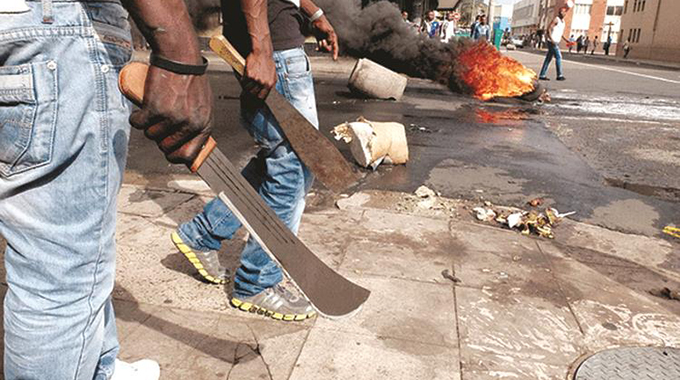 Almost 57 000 gold panners, including machete gangs and other criminal elements, have been arrested in mining communities countrywide since January under the ongoing “Operation Chikorokoza Ngachipere” and “No to Machete Gangs”.

Machete gangs, including those using knobkerries, have resurfaced countrywide targeting mines and people keeping large amounts of cash at home, as well as intimidating communities.

In a statement yesterday, national police spokesperson Assistant Commissioner Paul Nyathi said the operation will continue until there was order countrywide.

“The ZRP has arrested 56 764 people in the ‘Operation Chikorokoza Ngachipere/Isitsheketsha Kasiphele’ and ‘No to Machete Gangs’. Offences range from failure to comply with Covid-19 regulations, criminal trespass and others,” he said.

Asst-Comm Nyathi said the operation is ongoing and they had covered all the provinces and those that resist risk being arrested and face deterrent sentences as the police are in constant contact with the judiciary.

A few months ago, police restored order in mining areas after taking on the machete gangs head-on, arresting large numbers of people and thwarting a wave of violence that threatened to disturb gold mining and consequently deliveries to Fidelity Printers and Refiners.

Most of those arrested were fined since there was no evidence they had committed other criminal offences.

But others were sent to court for prosecution, facing various offences.

In another operation targeting foreign currency dealers in Harare, police arrested about 20 illegal dealers. Some were made to pay fines while others will appear in court soon.

The operation will continue until streets have been rid of the illegal dealers.

Last week, about 40 such dealers were arrested in Harare.

A team of police officers has been deployed, targeting areas where the dealers normally operate from.

This came after the ZRP observed the proliferation of illegal money dealers in cities and towns around the country and intensified its operations against all illegal forex dealers.