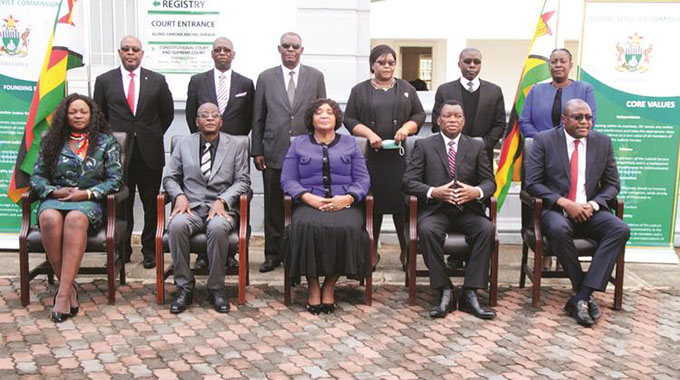 Six new Supreme Court judges were sworn in yesterday to bring the Supreme Court back to a full team after the promotion of five judges to the Constitutional Court.

Appeals are normally heard by a bench of three Supreme Court judges.

They were elevated from the High Court following the appointment of Justices Paddington Garwe, Rita Makarau, Anne-Mary Gowora, Ben Hlatshwayo and Bharat Patel as   judges of the Constitutional Court bench.

President Mnangagwa promoted the six senior High Court judges to the Supreme Court bench after consultations with the Judicial Service Commission as required by law.

“This is a milestone achievement in the delivery of the justice system. As you know the same bench was sitting for both the Supreme and Constitutional Court. This appointment will bring timeliness in the working of the two courts,” she said.

Commenting on the Chief Justice Malaba case, she said Government was confident of winning the appeal.

“We have confidence in the appeal that we have made. But whatever happens in the courts is beyond our control,” said Mrs Mabiza.

The Chief Justice and Deputy Chief Justice sit on the Constitutional Court by right, but the other five judges are appointed as individuals from the pool of qualified and experienced candidates.