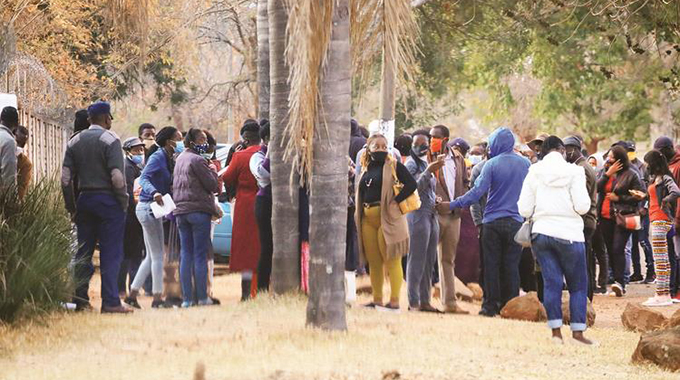 Part of a large crowd gathered at a Borrowdale, Harare, premise to engage in pyramid scheme activities before they were rounded up by the police for violating lockdown regulations

Crime Reporter
At least 65 people were arrested last night at premises in Borrowdale, Harare, where a money pyramid scheme is allegedly being operated.

The suspects were arrested for violating Covid-19 regulations and taken to Harare Central Police Station for further investigations.

“They were arrested in Borrowdale for violating Covid-19 regulations. They were found gathering and there was no social distancing.

“However police have also launched investigations to ascertain the legal status of the place where the suspects were arrested,” he said.

According to legal experts, a pyramid scheme is a fraudulent investment plan that can cost a lot of people their hard-earned savings. The pyramids promise huge and easy profits to “investors,” though they eventually collapse after the owners have benefited.

Pyramid marketers are known to seek out brand new victims almost from any place — at work, at churches and even by means of social groups or clubs.

But the pyramid schemes will ultimately fall without fail because the profits rely on signing up new members to the scheme and, eventually, every scheme runs out of fresh recruits.

The only people who may profit in a pyramid scheme are those at the very top of the pyramid.

Early this year, the quest for quick buck backfired for some people in Harare who lost large sums of money after being made to join pyramid schemes they were made to believe yielded 100 percent profit overnight.

The suspected conmen were brothers, Romeo (25) and Tinashe (29) Samhungu.

The pair allegedly devised a plan to swindle people using the pyramid scheme and promised investors very lucrative returns over very short periods of time, and for very little or no effort on the part of the investor.