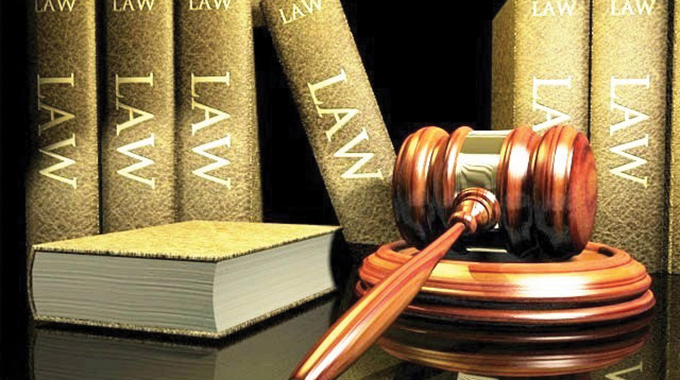 Fidelis Munyoro Chief Court Reporter
The Law Society of Zimbabwe (LSZ) has struck off the roll, seven lawyers with a contemptible disciplinary history of misconduct during the first four months of the year, as the society scales up its fight against unprofessional misconduct amongst its members.

The society which regulates the conduct of lawyers has made the fight against corruption among its top priority in its quest to augment Government’s vision to transform the country into an upper middle-class by 2030.

The latest casualties are — Augustine Chizikani, Benjamin Muchengete, Simbarashe Tawona, Obedience Muchuvaire, Tongai Matutu, Tendai Toto and Moses Chiganze — who were struck off the profession’s register between January and April this year.

This brings to 44 the number of lawyers that have been de-registered over the two decades between 1997 to April this year.

A statement from the LSZ published yesterday said the lawyers were de-registered for various misconducts ranging from misappropriation of trust funds, failing execute clients’ instructions despite having received legal fees, failing to account to clients and conflict of interests.

“The society has thus escalated its zero tolerance against unprofessional misconduct over the years with all members treated equally before law.”

The society said the increase in the number of lawyers being de-registered did not in any way reflect a decline in the standards of legal practice in the country but it was a reflection more efficiency in the prosecution of cases in the long chain from the secretariat, the council and at the tribunal level.

Most of the de-registrations, the society said, stemmed from cases that might have arisen more than five years ago

“The society remains committed to justice and the rule of law,” said LSZ, emphasising that effective regulation remained one of its strategic objectives.