The woman who led Ginimbi in death 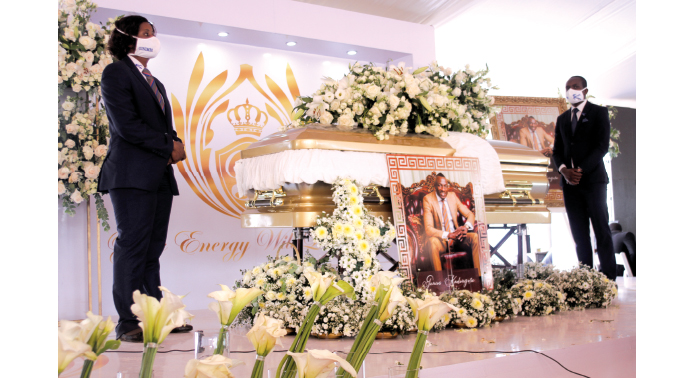 WHEN Ms Enivareta Mapara joined Doves Funeral Services 12 years ago, as a security guard, she never imagined that someday she would play centre stage at arguably one of the country’s most unforgettable funerals.

Back then, her job oscillated around the mundane — maintaining security at the funeral home.

But through years of hard work and perseverance, she was eventually promoted to the role of funeral assistant.

When the announcement came to her office that Doves would handle the funeral of late socialite Genius “Ginimbi” Kadungure, it never crossed Ms Mapara’s mind that she would be chosen to steer proceedings leading to the burial of the popular business mogul.

Her manager had no hesitation in picking the 40-year-old ahead of her peers.

For her, it was the gig of a lifetime — driving one of Zimbabwe’s most recognisable celebrities, who in life was known for his taste for fast and fancy cars — to his final resting place.

“In my line of work, when we receive news that we are handling the body of a deceased person, management nominates a driver to collect the body along with an ambulance assistant,” she told The Sunday Mail last week.

“Along with the family of the deceased, we process all the papers at the mortuary while the relatives handle the processing of the burial order.

“At the hospital mortuary we ask the family to identify the body before we collect it.

“We then take the body back to our parlour and place it in a cold room.”

While millions were following the frenzied coverage of Ginimbi’s funeral on multiple media platforms, it was Ms Mapara who was occupying the front seat and leading all the formal processes.

From collecting Kadungure’s body from the mortuary, up to the hour of his interment at his sprawling Domboshava mansion, Ms Mapara was the woman-in-charge.

From the thousands of pictures taken at the event, some may have noticed Ms Mapara, the tall and well-built woman, whose physical outlook seemed to match up with the challenges of her occupation, who stood next to Ginimbi’s gold-plated coffin.

She was praying for a seamless process, much unlike the incident-filled spectacles that usually mar such high-profile funerals.

“Most times unsavoury things happen during such high profile funerals.

“There may be complaints from the family, so one needs to be careful.

“So the night before the burial, I prayed that all would go well.

For Ms Mapara, the most challenging task during the funeral was leading Ginimbi’s funeral procession from Doves’ funeral parlour in the Central Business District through his famous night club — Dreams — before proceeding to his Domboshava mansion.

The assignment demanded inner strength and patience, she said.

Thousands of mourners had already lined the streets of Harare to catch a glimpse of the flamboyant funeral cortège bringing parts of the CBD to a virtual standstill.

Many roads, including Liberation Legacy Way (Borrowdale Road), leading to Domboshava were heavily congested as thousands of people stood on roadsides to watch the spectacle as the entourage passed.

“I have handled funerals of some high profile personalities, but this one was something else; it was so crowded.

“This meant that I had to be alert.”

The only hiccup which threatened to taint the otherwise incident-free occasion was a commuter omnibus ramming into the front of the Mercedes Benz Pilato hearse carrying the coffin.

Reflecting on the occasion, Ms Mapara says she still can’t believe how well she handled the proceedings.

“I am thankful that we managed to do this work well.

“I always pray to God for help, I was praying that on this day, everything would go smoothly.”

She adds that being recognised during the vote of thanks always gives her the utmost satisfaction.

A tale of hard work paying off

Ms Mapara’s rise from the modest charge of manning office entrances to the zenith of overseeing what may well be Zimbabwe’s funeral of the decade, was not without incident.

It is a tale of perseverance, shrewdness and hard work. For four years she toiled as a security guard, but through determination and an unflinching yearning to rise, she decided to get a driver’s licence.

Using her meagre salary to pay for driving lessons and the road test, she successfully acquired a Class Four driver’s licence.

It was about three years after getting her driver’s licence that she gathered the courage to apply for a job in her firm’s transport department.

There she worked as an ambulance assistant before being promoted to ambulance driver.

She then rose to take her current post of funeral assistant.