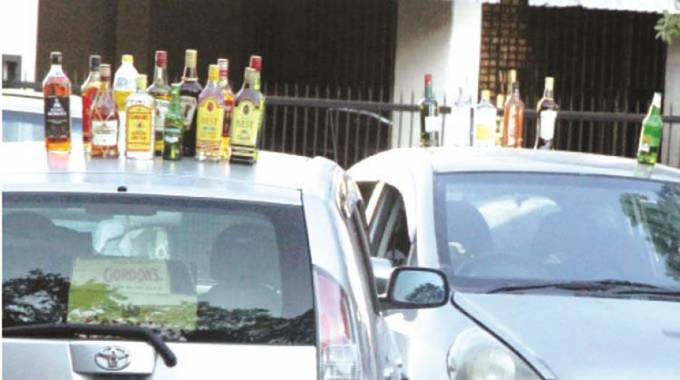 Until recently, counterfeit distilled beverages were only available on the streets, but investigations show that popular nightclubs, bottles stores, pubs and even supermarkets are dispensing the same.

It has been further gathered that a well-knit cartel including staff at some ports of entry, business people, transporters and “runners” are behind this seemingly lucrative business.

The prices of the counterfeits range between US$5 and US$40.

Among some of the premium alcoholic beverages that are being counterfeited are Jameson, Johnnie Walker Red Label, Best and Grant’s.

Some business people running entertainment joints are also alleged to be engaging middlemen to smuggle the counterfeits into Zimbabwe from Mozambique, South Africa and Zambia.

Locals are also distilling the alcohol which is packaged as Best, Two Keys, Russian Bear and Viceroy among other brands popular in the country.

Social media was recently awash with allegations that some of the people that unknowingly consumed the counterfeits had died of suspected alcohol poisoning.

This came after a patron is alleged to have died of alcohol poisoning outside the premises of an upmarket nightclub in Borrowdale during the Christmas holiday.

Officials from the upmarket joint, however, distanced themselves from the unfortunate incident.

When The Sunday Mail  visited the nightclub, officials from the Ministry of Health and Child Care were collecting samples of the suspected counterfeit beverages for analysis.

Who supplies the fake booze?

Sources told The Sunday Mail that the counterfeits that are finding their way into Zimbabwe are mostly manufactured in countries such as the United Arab Emirates, United States and Brazil.

Apart from restaurants and nightclubs, the fake beverages have become popular outside bottles stores, street corners and open-air entertainment joints, where they are sold from vehicles boots.

As part of the investigations, The Sunday Mail witnessed some of the fakes being packaged in Mbare.

The bottles were then carefully sealed to make them appear genuine.

A man who introduced himself only as Isaac said he has been in “this business” for two years.

“I get the alcohol in bulk from my source who is based in Mutare and I then repackage it for a profit. I only deal with those that buy from me in bulk,” Isaac said.

According to Isaac, some prominent businesspeople are also actively involved in this kind of business.

Isaac said he is supplied with alcoholic concentrates which are then mixed with methanol, an alcoholic chemical far more toxic than ethanol, before flavouring and colouring

Empty bottles from which genuine whisky has been consumed are collected from rubbish dumps, cleaned and packaged before fake seals are pasted on them.

According to Brian Maregedza, a whisky connoisseur, genuine whisky should have a “charcoal flavour” and it should not be hard on the throat.

Maregedza gave tips on how the general public could differentiate a fake from genuine whisky.

“Consumers should buy their whiskies from established liquor centres. They should also look out for the shape of the bottle and the branding. High-end whiskies can also be authenticated using smartphones by scanning bar codes,” Maregedza said.

Gibson Kawa said he collapsed and nearly died after consuming what he now suspects was fake whisky.

“It was not my first time to drink this particular brand of whisky. However, on that particularly day, I became dizzy and the next thing I woke up to see myself sleeping on the pavement,” Kawa said.

“In my eight years of drinking, I never came across something like that. I actually drank myself into a stupor, which is unusual. Something was wrong with that whisky.” Dr Admore Muringisi, a drugs and narcotics consultant, said commonly used substitutes for ethanol included chemicals used in cleaning fluids, nail polish removers and automobile screen wash.

Methanol and isopropanol, which are used in anti-freeze and some fuels, are some of the substitutes.

“These other types of alcohol can produce similar effects to ethanol in terms of making you feel tipsy. But they are also potentially very dangerous,” said Dr Muringisi.

He said drinking alcohol containing such chemicals could cause nausea and vomiting, abdominal pain, drowsiness, dizziness and can also lead to permanent kidney or liver damage.

Methanol, which, according to Dr Muringisi, can be used to produce fake vodka, may also cause permanent blindness.

Police spokesperson Assistant Commissioner Paul Nyathi said the police were embarking on an operation to flush out those behind the counterfeit beverages.

“Recently, a man was arrested in Ardbennie, Harare, after he was caught illegally adding potent ethanol into alcohol. Anybody found on the wrong side of the law will be punished,” he said.

Efforts to get a comment from Dr Eve Gadzikwa, the Standards Association of Zimbabwe director-general, were fruitless as she was not picking up her phone.

Basing on our investigations, it is clear that there is a thriving market for counterfeit distilled beverages.

* More details next week as the story unravels.