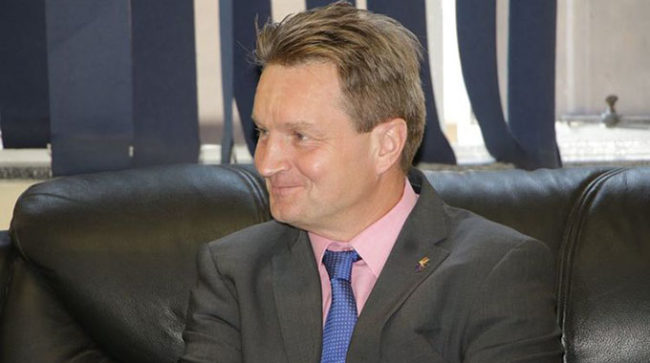 EUROPEAN Union ambassador to Zimbabwe Timo Olkkonen has said the bloc is still concerned about the January 2019 killings of protesters by the military and warned that the suspended restrictive measures on several individuals and entities risk being restored for gross human rights abuses.

Speaking to journalists in Gweru on Tuesday after launching a legal aid clinic at the Midlands State University, Olkkonen said although the annual review of the restrictive measures took place mid this month, the EU council can always come back anytime in view of positive or negative developments in order to review the measures.

Speaking on the list of people on the restrictive measures, the ambassador said the bloc wanted to punish those responsible for human rights violations as well as send a message that the bloc was watching developments in the country.

“The considerations that the council did on the restrictive measures are also meant to send a message that we are still looking at Zimbabwe,” he said.

Posting on its Twitter handle on February 17 this year after the bloc’s council review meeting, the EU Zimbabwe embassy said four people remained on the restrictive measures.

The EU extended sanctions on the Zimbabwe Defence Industries.

Olkkonen said the January 2019 killing of at least 17 civilians by the military dented the country’s image in a big way.

“2019 was not a very good year in terms of human rights for Zimbabwe. We had events in January and individual cases all along the year and indeed those were also some of the reasons why the council took the decision that it took in terms of position on extending the restrictive measures,” he said.

“These things (restrictive measures) are related to the chain of command. When we are looking at various incidents such as the January events and what happened, who had the responsibility on certain issues and obviously the security forces had an important role in the human rights violations of the day.

He said President Emmerson Mnangagwa must fulfil the reform agenda if Zimbabwe was to be readmitted into the family of nations.

He added that national dialogue is the answer to the country’s multi-layered economic crisis that has seen Zimbabweans going through enormous hardships.

The ambassador said the EU was concerned by failure by Mnangagwa’s administration to fulfil the reform agenda it set for itself upon assuming power.

“The EU expressed itself on those matters (political reforms) two weeks ago when we had the council conclusions on Zimbabwe. The council is the meeting of the forum ministers of the EU and they gave their conclusions. We raised our concerns about the slowness of reforms and we hoped that they would pick up pace,” he said.

Responding to a question on what exactly Mnangagwa must do to get full support of the EU, the ambassador said: “The government has spelt for itself a reform agenda, which we hope they would push through and it includes such issues as the constitutional realignment and recommendations by Motlanthe Commission and electoral observer missions.”

Olkkonen also pointed out that Zimbabwe’s history of human rights violations was repeating itself and urged authorities to address the crisis if the country is hoping to be re-admitted into the community of nations.

“Every country is peculiar in its own right and you can’t contest the fact that we have a history with Zimbabwe and whatever we are doing now is also reflective on the past experiences,” he said.

The ambassador said there was hope for restoration of fully-fledged relations between Harare and Brussels.

“We are engaging, we have a free trade agreement, we have political dialogue, we have issues going on. I know one major thing is the issue of debts and access to concessional credits,” he said.

“Again this is an issue that has nothing to do with restrictive measures but it’s something because Zimbabwe did not pay well on its loans to multilateral financial institutions at the end of the 90s but I know it is something that the government would like to look at. But before that there would be need for an economic reforms track record.”