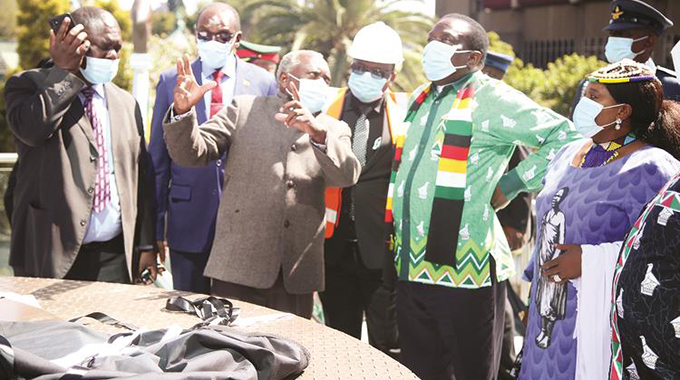 The great continent of Africa has now awakened and will tell its own story for the benefit of both present and future generations, President Mnangagwa said as he unveiled the statue of Zimbabwe icon and legend Mbuya Nehanda yesterday.

The statue, which was erected at the intersection of Samora Machel Avenue and Julius Nyerere Way in Harare, was unveiled in front of Government ministers, diplomats and regional leaders. It was also beamed live on ZBC, with millions following proceeding from their homes.

The Second Republic, under the leadership of President Mnangagwa has made it its mission to tell the Zimbabwean story and immortalise its heroes and heroines through monuments.

And the statue of Mbuya Nehanda, that now stands tall in the country’s capital city, is the first among many that will be hoisted across the country to remember inspirational African foundational figures such as General Khumalo who defeated the Allan Wilson invading column.

The President, who is part of the generation that took up arms to fight the country’s colonisers during the Second Chimurenga, said it was befitting that after 123 years the country honoured Mbuya Nehanda, whose words “mapfupa angu achamuka” (my bones will rise) inspired him and his contemporaries.

The unveiling of the statue coincided with the marking of Africa Day, a day set aside to reflect on African unity, cultural diversity and the continent’s valiant struggle against colonialism.

President Mnangagwa said the statue of Mbuya Nehanda was a reflection and embodiment of the heroic people who confronted colonial aggression and paid the supreme sacrifice for the freedom enjoyed today.

“The unveiling of the statue of Mbuya Nehanda Nyakasikana is the manifestation of the bold commitment to reconstruct our country’s rich past and history. It equally stands as a symbol of unity, identity and an inspiration to present and future generations on the importance of unflinching patriotism, loyalty, fortitude and determination to defend and work for our beloved country, against any odds.

“The statue is thus a bold and unapologetic statement of the fact that ‘we are a people who know who we are and where we come from’. It is a declaration that we stand proud of our identity. As such, the warrior spirit of Mbuya Nehanda and other iconic heroes and heroines should motivate us to fully utilise our God-given resources to build the Zimbabwe we all want, through hard honest work.”

The President said the Government had resolved to revisit the monuments, battle sites, and restriction and detention camps to ensure that the narratives of the nation were presented in the correct historical perspective.

He encouraged national institutions, communities and the education sector to play a part in correcting and popularising the rich history of the country.

“My administration deliberately chose this site to place the statue and museum of our national heroine Mbuya Nehanda Nyakasikana. It is in this vicinity that there were springs from which she would drink water and rest,” said President Mnangagwa.

He added that the colonisation of the country was a bloody and brutal conflict that resulted in the indiscriminate loss of lives and property against which the people of Zimbabwe fought with guidance from heroes such as Mbuya Nehanda, Sekuru Kaguvi, Mkwati, Siginyamatshe, Umlugulu and Queen Lozikeyi.

The President emphasised the importance of keeping record of the true accounts of events that happened in the past.

“A people without the knowledge of their past history and origin are like trees without roots. Under the Second Republic, the journey of portraying our true history and heritage through the correct glorification of our people has begun. This is factual history and we are setting the record straight. As we do so, the determination to tell our own story from our own perspectives emboldens and encourages us,” he added.

President Mnangagwa reiterated Government’s commitment to the construction, promotion and preservation of the acts of heroism, bravery and the warrior spirit of the heroes and heroines of the First and Second Chimurenga.

By the same token, he said acts of patriotism, loyalty, selfless service and hard work by the people of Zimbabwe across all sectors would be recognised and celebrated.

“As we journey towards Vision 2030 and in line with the Devolution agenda and the National Tourism Recovery and Growth strategy, provinces, districts and communities must derive economic value from the ongoing initiatives to preserve the history, culture and heritage of our country. The presence of this monument here in Harare, along with the Museum of African Liberation will have a far reaching impact on tourism in the province,” said the President.

He challenged the Harare City Council to re-imagine the ambience of the city, informed by the ongoing quest to modernise both the rural and urban environs.

“I exhort the Harare City Council and the public as a whole to preserve and safeguard this national strategic asset,” the President said.

The pledges made by Africa’s founding fathers in 1963, at the founding of the Organisation of Africa Unity (OUA) now African Union, must persistently inspire all Africans “towards a shared prosperity and wellbeing; for unity and integration; for a continent of free citizens and expanded horizons, where the potential of all people, in particular women, youth and the disabled are realised.

“It is also important that we work harder for peace and a continent free from all forms of neocolonialism. Let no one ever divide us or patronise us in any manner or fashion. We are a proud African people; a continent that has awakened and is rising towards a brighter and prosperous future,” the President said.

This year’s Africa Day Commemorations were held under the theme ‘The arts, Culture and Heritage; Levers for Building the Africa We want’.

“It is on this day that we honour our founding fathers and the many sons and daughters of Africa who pioneered the liberation, emancipation, development and prosperity of our mother continent. It is indeed a time to also galvanise collective action towards the achievement of the vision and aspirations outlined in the African Union Constitutive Act and agenda 2063,” he said.