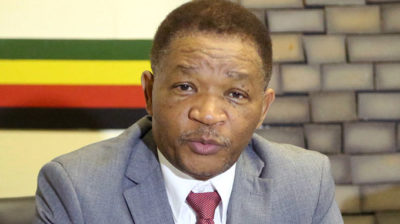 Transport minister Joel Biggie Matiza has been fingered in a $66 000 fuel scam by his aide who told the Harare Magistrates Court on Monday that he took 19 000 litres of fuel with the minister’s knowledge.

Cephas Chiwetu, who was employed as Matiza’s personal assistant, yesterday said he gave his former boss some of the fuel coupons and kept others for stakeholders, including journalists to facilitate their covering of Cyclone Idai.

Chiwetu allegedly got the fuel and a Ford Ranger on the pretext that the minister wanted to use it to visit cyclone-hit areas in Chimanimani and Chipinge. He did that several times allegedly abusing the fuel, defrauding government of $66 000.

Through his lawyer Batanai Pesanai, Chiwetu pleaded not guilty to the offence when he appeared before Harare magistrate Estere Chivasa.

He said Matiza was aware that he requested the fuel and the motor vehicle for his (Matiza’s) use on trips to Cyclone Idai-hit areas.

But the State, represented by George Manokore, insisted that Chiwetu misrepresented that the fuel he requested from Zinara was for the minister’s use, but he converted it to his own personal use.

“My former boss (Matiza) was aware of all these requisitions. I gave him some of the fuel coupons and retained some which I was to give to other stakeholders, including journalists covering the event,” Chiwetu told the court.

Chiwetu allegedly got fuel from Zinara on behalf of Matiza whom he knew was at the same time being allocated fuel from his ministry for assessment of the areas affected by Cyclone Idai, according to the State.

Chiwetu had been barred from driving employer vehicles after he was involved in a road traffic accident with a government vehicle, the court heard.