Air Zimbabwe only recently acquired two older Boeing 777s from Malaysia Airlines. However, it already has plans to lease out the two Boeing widebodies in order to raise much-needed funds. The airline eventually has plans to fly these aircraft to destinations in China and the U.K. but this will have to wait until the leased aircraft are returned.

The airline’s administrator, Reggie Saruchera of Grant Thornton, broke the news this weekend. Saruchera added that nine companies have already expressed interest in leasing the two Boeing 777-200ERs. The aircraft both have a carrying capacity of 282 passengers. Details of the identity of the nine companies was not disclosed. 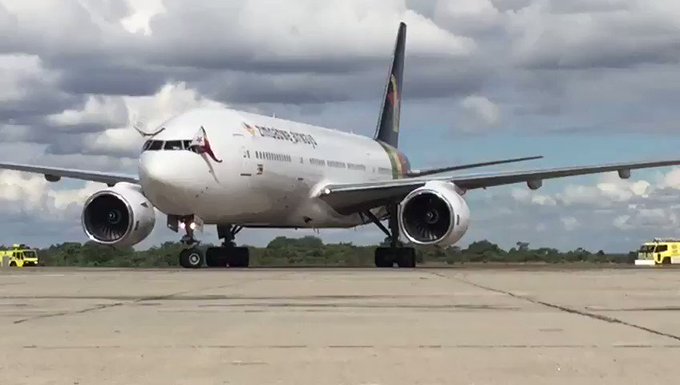 While the aircraft are leased out…

It looks like while the aircraft are being leased out, the airline will take the opportunity to train its flight crew as well as maintenance and ground-handling personnel on the new arrivals. However, whether or not they can do this effectively in the absence of the actual aircraft is a big question.

The national airline will be leasing out the two Boeing 777-200ER aircraft in the immediate, pending re-introduction of international flights to China and London after developing a robust domestic and regional route network…During the lease period, the airline will embark on training of flight crew, maintenance and ground handling personnel.

Saruchera also says that the national airline will use the revenue gained from the 777 leases to buy an additional narrow-bodied aircraft.

Air Zimbabwe was placed under “reconstruction” in October 2018. This was done in order to allow it to clear its debts, which are understood to be more than US$35m owed to foreign creditors.

According to Bulawayo 24 News, settling of the legacy debt would allow the administrator to settle outstanding issues with creditors and remove the airline from reconstruction. With economic turmoil going on inside the country, the airline has also suffered the embarrassment of having its aircraft impounded outside the country due to outstanding debts. In fact, a Boeing 767 belonging to the airline was impounded last October by the Airports Company of South Africa.

While it is all well and good for a country to have an airline of its own – it is debatable whether or not it is a necessity. With the country suffering enormously from hyperinflation and a weak economy, it may be best for the government to put its commercial aviation aspirations on hold and spend money elsewhere.

Do you think Zimbabwe’s government should further invest in getting its national airline back to good health? Or should it focus on other issues instead? Let us know in the comments.

Simple Flying has sent Air Zimbabwe an inquiry email regarding details of the lease. At the time of publishing, we have yet to receive a response. This article will be updated if news comes in.