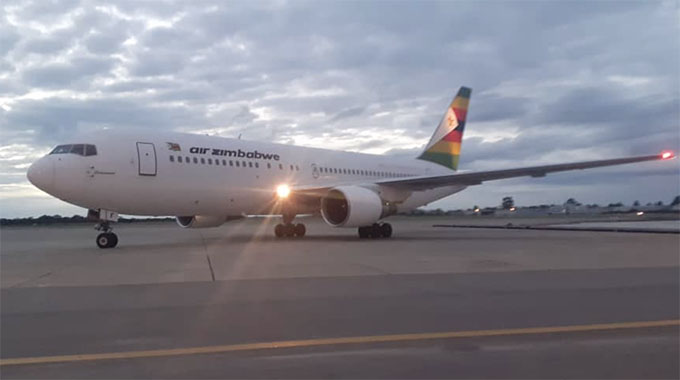 Political Editor
ON Monday, early in the morning, Government officials set camp at the Robert Gabriel Mugabe International Airport awaiting the arrival of the first batch of Covid-19 vaccines, a gift from China that could see the country being the first to roll-out mass vaccination in the region.

Later in the day, President Mnangagwa officially received the vaccines that he described as a shot in the arm, especially, at a time when the nation was observing a Covid-19 national lockdown.

It was a historic moment that has been hailed across the globe as the country used its own resources, including the national airliner Air Zimbabwe to bring the vaccines home leaving many in the region wondering how the country has been able to keep its bird in the air when other airliners are facing imminent collapse.

But before Chimanimani took to the skies, Government gazetted Statutory Instrument 41 of 2021, which empowered the Minister of Transport and Infrastructural Development Felix Mhona in consultation with the board which exempted the imposition of a requirement to conduct a proficiency check on Air Zimbabwe B767 Flight  Deck Crew to embark on Charter operation to the People’s Republic of China to collect Covid-19 vaccines.

Despite being new on the job, the Minister had to sign the Statutory instrument given that the task at hand was of utmost national interest and security.

“Chimanimani (the Air Zimbabwe plane) landed safely at #RGMIA. Many thanks and appreciation to our crews both ground and air for yet another successful operation. A great appreciation to all our frontline workers who are giving their all to save lives,” the national flag bearer wrote on Twitter.

Zimbabwe aims to procure no less than 10 million vaccines from countries such as China, Russia, India and the United Kingdom and Air Zimbabwe which has, despite its challenges vowed to serve the nation and save lives during the difficult times spawned by Covid-19 virus, will no doubt play a leading role.

On Twitter nationals from South Africa, Namibia and other African states envious as to how the airline has been able to keep soaring, even as others are facing operational challenges.

Another blogger Seshego Sa MaTladi wrote, “Air Zimbabwe, not Fly Emirates, Air Zimbabwe, let that sink in. They are definitely bringing home proper vaccines, not some Himalayan salt infused water that expires before even being rollout” in an apparent jab to South Africa which received an ineffective vaccine.

Air Zimbabwe Boeing 767-200ER which is named Chimanimani has over the past year traversed the universe, from China, Pakistan and the Western world, bringing students back home, Covid-19 personal protective wear and other sundries.

On Monday, the airliner was again a source of national pride as it brought vaccines that will be rolled out next soon to help immunise the populace against the world pandemic.

A South African tabloid The Citizen screamed “Zimbabwe beats SA to the vaccine” triggering a social media frenzy that exalted Air Zimbabwe for coming to the service of its people during a time of need.

That is not the only heroic flight that Air Zimbabwe has taken under the clouds of Covid-19, in fact it has soared high as a rescue plane not only for its distressed citizens, but also for other African citizens who needed to be airlifted back home when Covid-19 forced closure of most public events last year.

Despite the national airline being under administration, its role has been displayed and it is still standing at a time airlines in the region are collapsing. It is indeed a source of pride and comments from citizens of other countries show that national airlines are in crisis all across the continent and beyond.

While doomsayers were saying the Government should have hired planes, the wisdom was not to pay an external provider when we could support our own.

It was a difficult decision to put the airline under administration, but all support should be rendered for the administrator to do their work unhindered so as to turn around the company.