Albinism is not a curse: Musician

Source: Albinism is not a curse: Musician | Sunday News (Entertainment) 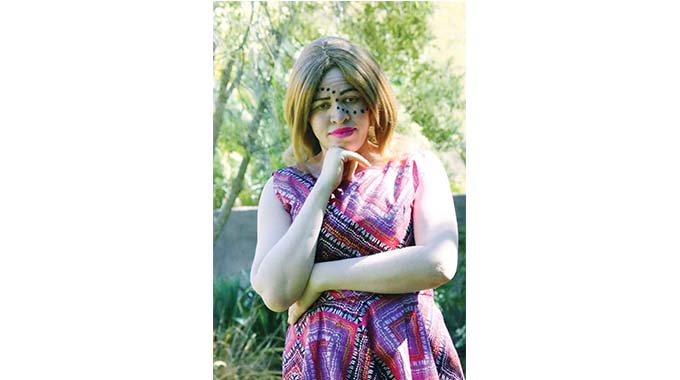 Lance Chigodo, Sunday Life Correspondent
IN the past in many African communities, albinism was regarded as a spiritual curse and children born with the condition were either killed or hidden in granaries.

But with education, people began to have their eyes opened to realise that it was not a curse or a disability but rather a biological condition that can be unpacked scientifically. It has nothing to do with spirituality or witchcraft.

And society have now become so used to it with a number of people with albinism having defied odds and excelled in different fields.

One of these to have defied all negative stereotypes associated with albinism is Marvelous Tshuma who has dedicated her life to uplifting the lives of people with albinism through her music and partnering certain stakeholders to sustain the livelihood of people with the condition.

The Afro-pop and gospel musician who is known in the music circles by many names such as ikhiwa is blessed with an angelic voice and a wonderful personality inspired by what she went through as a child as she grew up in the remote community of Binga which is where she obtained the name Queen of BaTonga.

“I am from Binga, pure Tonga from Samende Village. Both my parents are of Tonga origin,” she said.

Marvelous’ 2021 first resolution is to defeat stigma, stereotypes, empower other persons with albinism showing that lacking melanin does not mean inability as they are simply white while black.

The 24-year-old despises being called names and mocked. She also does not subscribe to people who term persons with albinism as people living with albinism.

“We are not people living with albinism, we are people with albinism. We live with our families, not albinism,” she said humorously.

In her new album Milimo Yatata, which means the works of God, recently launched in Bulawayo she sings, explaining that persons with albinism are people too, despite skin differences and God has uplifted and blessed her with talents that other people do not have.

“The song Milimo Yatata means the work of God or the work of the father. In the song I sing of how people should not discriminate us because we are the same. I can cook or even sing well. People envy me and want to work with me.

It is now different from when I was growing up and feeling useless. My eyes did not function well but I made it far with a poor eyesight God-willing,” she explained.

She has also sang songs such as Stay With Me, where she sang in agony after the feeling of what people with albinism go through crossed her mind. Marvelous also has been a victim of verbal abuse and name calling and instead of reacting she now chooses not to react but comfort herself through her music.

“I was once provoked by a man who called me names at Renkini Bus Terminus and I assaulted him badly. I spent the whole day at the police station for that and I wasted a lot of time. The songs Milimo Yatata and Stay With Me are dedicated to persons with albinism out there and what they go through.

I advise my fellow mates with albinism not to react with violence or anger but be the ones to understand when people call them names,” said Marvelous.

Marvelous has worked for Skyz Metro FM and Zimbabwe Broadcasting Corporation as a radio personality or presenter. Her talent and outstanding abilities to sing and present has inspired a number of people with albinism to pursue their dreams such as Chidadiso Mbazi who is pursuing poetry.

Through Albinism Konnect an albinism programme launched on 5 December 2020 in Bulawayo, the songbird is up in arms with albinism stereotypes and is empowering persons with albinism through organising jobs which exposes them to less sun rays and donating sun hats and sunscreens to prevent sunburns which may cause serious skin infections or even cancer.

“The cancer issue is one of the serious matters people are dying from especially in rural areas where people tend to ignore such issues until they become critical. The thing starts as a bump until it develops into something bigger. We realised that if we do not help people they will die,” said the Queen of BaTonga.

Marvelous spoke of the hard times she faced as a child as she tried to go to school and also do chores like any other child.

“I used to go to school at 5am and return after 4pm to avoid the hours when the sun would be blazing hot. Boreholes and schools are very far from homes like most rural set ups in Zimbabwe. I did try to avoid the sun and from my experiences I learnt that sunscreen is very important even when you wear long sleeved clothes,” she added.

By the end of 2021 Marvelous is looking forward to reaching out to as many communities as possible to empower people with albinism, end stigma and victimisation. She also hopes to take her career to greater heights and also empower others in arts as she is on her way up the ladder.