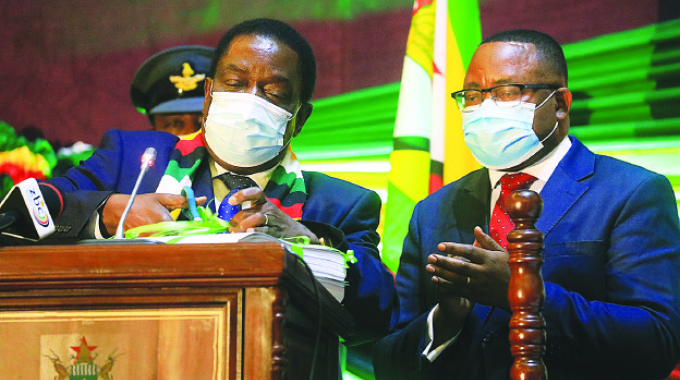 The attainment of an upper middle income society as envisaged by Vision 2030 requires the contribution of everyone in society with no one left behind, President Mnangagwa said yesterday when he launched the National Disability and the Labour Migration Policies to ensure everyone can participate.

The two policies are part of Government efforts to ensure inclusivity as the country embarks on its development path and the National Development Strategy 1 (NDS1) was disability inclusive and acknowledges Diaspora engagement.

The National Disability Policy is a culmination of consultations between Government and representatives of persons with disabilities that began when the President met them in 2018 to ensure that disability programmes were mainstreamed in the Government institutions and activities as required by section 222 of the Constitution.

The Labour Migration Policy was crafted to enhance the contribution of Zimbabwe’s Diaspora and migrant workers to the country’s development.

In his address, President Mnangagwa said people with disabilities should not be viewed as charity cases but as individuals capable of contributing to the development of the country like any other citizen.

“The journey towards the attainment of Vision 2030 of an empowered and prosperous upper middle income society entails that no one and no place should be left behind.

“To advance this quest, the importance of legislative frameworks and policies that guide us as we fulfil, promote, protect and respect the rights of this and other constituencies cannot be over-emphasised,” he said.

The Government had made great advances in addressing the plight of persons with disabilities through the establishment of the Special Advisor on Disability Issues Unit headed by Cde Joshua Malinga and the Department of Disabled Persons.

The Government also approved the policy on the equalisation of employment opportunities for people with disabilities in employment.

“Most recently, the Public Service Commission has commenced the recruitment of gender, wellness and inclusivity personnel for all the Government ministries and agencies.

“These must ensure that disability is mainstreamed in the whole of Government, among other institutions,” he said.

The President bemoaned the delays in passing the amendment to the Disabled Persons Act, despite the principles being crafted in 2018, saying it was not in keeping with Government’s work ethic.

He also criticised harmful cultural practices, discrimination and marginalisation of people with disabilities saying that these practices should end.

On the Labour Migration Policy, the President said it was born out of a realisation of the link between labour migration and sustainable development.

Migration was now intrinsically linked to the development potential of any country.

“As such, the management of migration is equally key in the national socio-economic discourse, more so in our case as a considerable number of Zimbabweans live and work in the Diaspora,” he said.

“The policy will undoubtedly help improve the governance systems around labour migration, as well as protect and empower the migrant workers to contribute and participate in Zimbabwe’s socio-economic development.”

Diaspora contributions had a positive impact on capacity use, disposable incomes and community livelihoods and challenged the nation to move away from transactional relations with the citizens in the  Diaspora.

“Let us instead ensure their inclusion and participation in broader social and economic spheres. The skills, experiences and knowledge which reside in our Diaspora must be leveraged to leapfrog our development and the achievement of Vision 2030,” he said.

President Mnangagwa challenged the Diaspora to take advantage of Government’s empowerment policies and investment prospects in agriculture, mining, health and ICTs, among others.

He urged the ministries of Home Affairs and Cultural Heritage, and of Foreign Affairs and International Trade to improve accessibility to birth certificates and national identity documents and passports for citizens to reduce human trafficking.

Speaking at the ceremony, Vice President Constantino Chiwenga said the launch of the two policies was a milestone in national development. Zimbabwe should be bound by the spirit of inclusivity and unity as everyone was equal before God.

Cde Malinga thanked the President for launching the policy saying it was a product of wide consultations with persons with disabilities being actively involved. People with disabilities were part of the attainment of a future prosperous Zimbabwe as envisaged under Vision 2030.

“The National Disability Policy is a treaty between the Government of Zimbabwe and persons with disabilities for their empowerment,” he said.

He wanted Government to make Sign Language mandatory in the education sector, and set aside a 15 percent quota for disabled persons in all spheres of life.