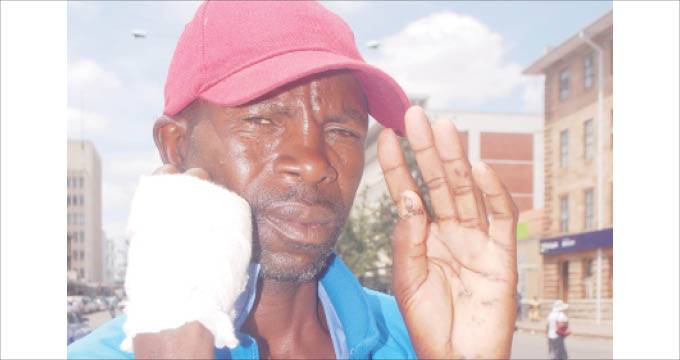 AN expedition to harvest the much sought after mopani worms (amacimbi) almost turned tragic for a security guard employed at Whitewater High School in Matobo District, Matabeleland South, as he found himself wrestling with a leopard which he miraculously fended off by choking it.

Mr Abednigo Moyo of Halale Village, situated near the famous Njelele Shrine, used bare hands to wrestle and choke the big cat after it attacked him while he was harvesting amacimbi. His brother who had also accompanied him to the amacimbi expedition emerged from the bushes and finished off the vicious predator by axing it. So daring was Mr Moyo that his final technique to outfox the predator saw him shoving his hand into its mouth in an attempt to block its windpipe.

For all his efforts to save his life, he was, however, later arrested for poaching. He appeared before a Plumtree magistrate on Thursday last week facing charges of killing an endangered animal. He was remanded out of custody to 3 February on $300 bail.

Sunday News tracked Mr Moyo last week who narrated his near brush with death and how he fought the animal to its death. Mr Moyo said the incident happened on 13 January at Gumela Farm situated along the Bulawayo-Maphisa Growth Point Road.

“The day started well,” he recalled. “My brother Isaac, his wife and I went to Gumela Farm owned by Mr William Ncube and we sought permission to harvest amacimbi at his property, which we were granted.”

He said he then decided to continue with harvesting but all of a sudden, he heard an unusual sound of something approaching from the thicket.

“Before I could even see or react, a leopard emerged charging towards me. I tried to run but it was too late, the predator attacked me and I don’t know how I gathered the strength and managed to grab it by the neck before it could savage me,” he said. Mr Moyo said, however, the grip was not strong and the leopard freed itself but it slipped and lost balance.

“I realised that if I don’t do something the animal would kill me. It was either I die fighting or I get mauled.”

He said when it opened its mouth ready to sink its teeth on him, he shoved his hand into its mouth and grabbed its windpipe. “It was painful because at the same time, the leopard was biting my hand but I was choking it from inside while the other hand was fending off its claws. I was also screaming at the same time. The struggle went on for a minute or two and I could see the animal was also losing power from the choke,” he said. Mr Moyo said his brother heard him screaming and rushed to investigate. “When Isaac arrived, the leopard was already losing strength. He then axed it and that is how I managed to eventually free myself. It died and we left it there,” he said.  Mr Moyo was rushed to Natisa Clinic for treatment.

“I called at my workplace and told them what had happened and after that I went to Natisa Clinic where I was given some injections and the wounds were stitched. It was not serious because that same night I managed to report for work,” he said.

But his woes were not yet over despite the heroics to save his life. “In the morning rangers came to my homestead and arrested me and my brother for poaching. The rangers were carrying the skin of the leopard and told us that we had killed an animal classified as an endangered specie and we were taken to the police. It is the law but I wonder what else I could have done under such circumstances. The issue was either I get killed to save the endangered leopard or fight for my life.”