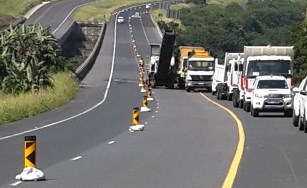 HARARE – President Emmerson Mnangagwa’s audacious plans to construct and rehabilitate the country’s road infrastructure to try and kick-start Zimbabwe’s sputtering economy is on course, The Financial Gazette has established.

Early this year, the government — through the Zimbabwe National Roads Administration (Zinara) — set aside over $232 million fund for the emergency road rehabilitation programme and hotspot rehabilitation.

“Initially, we had set October as our target to finish the first phase of our Norton-Chegutu dualisation project, but we have revised it down to August,” he told journalists during a tour of the project last week.

“This is the fastest pace in the history of Zimbabwe and with funds permitting; we have already began opening up some 10 kilometres from the tollgate.”

Mapurisa noted that the project, which has four bases in other places due to the expansive ground conditions, was being constructed at the cost of $1,2 million per kilometre.

The Harare-Gweru dualisation project is part of the ambitious plan to dualise the Harare-Bulawayo Highway at an estimated cost of nearly $500 million.

Various studies from the African Development Bank and the World Bank show that Zimbabwe needs about $5,5 billion to rehabilitate its road network that has suffered neglect over the years.

Stephen Kamutema, the Midlands provincial engineer said for the first time in many years, the province was allocated over $21 million to rehabilitate roads that had become almost impassible due to lack of maintenance and harsh weather conditions.

Some of the projects in the area include the reclamation of the Gokwe centre gully, rehabilitation of the Gweru-Zvishavane, Kwekwe-Nkayi and the West Nicholson roads aimed at decongesting the Gweru-Beitbridge road, paving of the Mberengwa-Matagar road and many more projects.

In Bulawayo, director for engineering services Simela Dube said the city council is in the process of refurbishing major and artery roads through surfacing, pothole filling, resealing among other projects.

“The city’s network is estimated at 2 100 kilometres and requires close to $750 million to bring the roads to good condition and periodic maintenance,” he said.

Matabeleland South provincial engineer Denis Mapfurira, said they have received over $10 million for road rehabilitation and hope to improve on its 2 267 km road network where close to half was still gravel roads. The province was rehabilitating the Gwanda-Tuli and Gwanda-Maphisa roads.