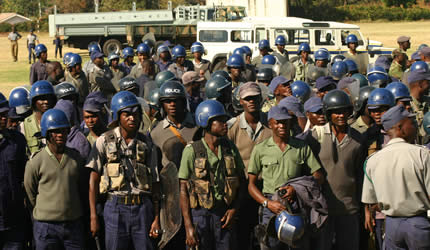 Harare residents have reported an unsettling presence of heavily-armed police and soldiers who have set up roadblocks on all major roads leading into the city.

Results of Wednesday’s elections already show that ZANU PF has a two thirds parliamentary majority, in what has been described as “the mother of all electoral frauds”. ZESN has said the presidential results would be announced at 5pm on Saturday. At the time of writing these results were not yet available.

A message posted on Facebook Saturday said some soldiers were stopping vehicles “just off the intersection of Sherwood Drive and Princess Road (old Bulawayo Road). What is going on?”

Another message from Friday said: “This afternoon at approx 1500hrs five lorry loads of riot police and 2 water cannon trucks seen parking up at freedom square behind rainbow towers (old Sheraton hotel) across the road from Harare show grounds.

“We saw police setting up tents at freedom square. Also Harare is full of road blocks and in particular we have just seen at the intersection of Sherwood drive and Princess Road (old Bulawayo) heavy police presence stopping all vehicles and searching them, with army present.”

Observers said the heavy presence of armed security personnel appears to be a pre-emptive move by the police in view of the simmering anger at the way the elections were conducted.

Other reports have suggested that the police were stopping vehicles and searching them for weapons, as reported by the South African Mail and Guardian newspaper.

Harare-based SW Radio Africa correspondent, Simon Muchemwa, said the police had already issued a warning against what they said were ‘premature celebrations or protests’.

“There are armed officers, complete with anti-riot gear, and some of them are being assisted by armed military personnel. All vehicles coming into the city centre are being searched, with only a few waved on just to clear the congestion.

“There seems to be a fear that people may rise up in protest following the MDC-T’s rejection of the poll result. Police Commissioner Charity Charity has already threatened to arrest any people who react with protests against this, or any future government.”

An official from the Crisis in Zimbabwe Coalition told SW Radio Africa Saturday that Zimbabweans should engage in civic protests to demonstrate their anger at the way the election has been stolen, in violation of their democratic right to choose their own leaders.