Anything short of dialogue is futile

Source: Anything short of dialogue is futile | Theindependent (Zimbabwe) 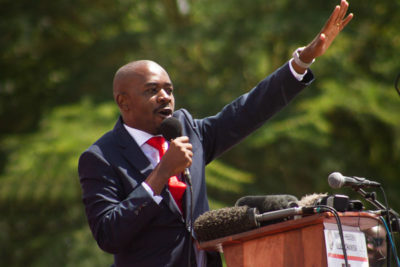 THE Zimbabwe National Chamber of Commerce, one of the main business organisations in the country, recently added to the chorus of calls for President Emmerson Mnangagwa and MDC Alliance (MDC-A) leader Nelson Chamisa to engage in dialogue to address the country’s multi-faceted crisis.

The call comes in the wake of concerted efforts to bring Mnangagwa and Chamisa to the negotiating table following the disputed presidential election in 2018, which Mnangagwa won by a wafer-thin 50,6%.

However, the efforts have hit a brick wall due to the entrenched positions of the two political leaders. Mnangagwa insists Chamisa must recognise him as President before negotiations begin, while Chamisa says the legitimacy of the septuagenarian leader should be one of the issues up for discussion. Mnangagwa set up the Political Actors Dialogue (Polad), which comprises opposition leaders who contested the 2018 elections and has said he will only negotiate with Chamisa through this platform. However, Chamisa has rejected this saying Polad is basically a group of Mnangagwa cheerleaders.

As part of the recommendations made at its annual general meeting recently, the ZNCC noted that the standoff between the leaders of the two parties has crippled its operations.
“The obtaining political noise is weighing on business due to perceived country risk,” the ZNCC said in its recommendations. “We recognise the presence of Polad, however, there must be genuine engagement of political parties — there must be commitment for dialogue from the two political protagonists, Zanu PF and MDC-A.”

The business body’s call is apt given the prevailing desperate state of affairs. This includes a debilitating liquidity crunch, fuel, cash and foreign currency shortages, dwindling investment inflows, plummeting capacity utilisation, starvation and a weakening local currency that has resulted in inflation galloping past the 800% mark, which is the second highest globally only behind strife-torn Venezuela.

To add to these woes, is a restive workforce as evidenced by the strike by health workers which has lasted for more than two months over the demand of payment in foreign currency given the unstable local unit and threats by other civil servants to follow suit.

Given the nature of the crisis, political dialogue between Mnangagwa and Chamisa is pivotal. Long suffering Zimbabweans do not care about political grandstanding and petty point scoring by either side. They need food on the table, decent incomes in a currency that does not lose value on a regular basis and a roof over their heads.
The Polad platform, which is constituted by political rejects looking for relevance, is not the panacea to the country’s ills, especially if it does not involve the main opposition party, the MDC-A.

The benefits of dialogue were evident when the late former president Robert Mugabe and his nemesis, the late MDC founding president Morgan Tsvangirai agreed to form a Government of National Unity. Though it was far from perfect, it helped bring some stability to the country with capacity utilisation going as high as 57% in 2011.

The post Anything short of dialogue is futile appeared first on The Zimbabwe Independent.