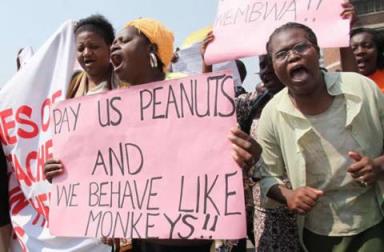 Speaking after the meeting, Apex Council president Cecilia Alexander said the purpose of the meeting was to get a response from the government on a position that the council presented to NJNC in November 2018. The civil servants had demanded a basic salary of $1 733.

“It is quite disturbing that government brought a 10 percent offer which translates to only $41 for the least paid civil servants, and as Apex council we have rejected this offer in totality,” Alexander told the Daily News.

She said that the council arrived at a $1 733 increase after weighing  the current situation and the cost of living.

“To make matters worse, the 10 percent increment is meant to start in April,” said Alexander.

The council said they are counting down to the 14-day notice and it is up to the government to find a solution.

This comes after Public Service Commission (PSC) chairperson Vincent Hungwe said the NJNC meeting would specifically address issues to enhance the capacity of government workers to effectively discharge their duties in their respective sectors.

“Government has to make sure that whatever they are going to give us will be in US dollars as we are not going to accept anything less than that, reason being the economy has already dollarised and retailers are charging in US dollar even fuel is sold in US dollars,” said the Amalgamated Rural Teachers Union of Zimbabwe (Artuz) president Obert Masaraure.

While the Zimbabwe Teachers Association (Zimta) welcomed the gesture by government, it said it is not over until they win the struggle.

“All we want is for government to give us money so that we return to work and we are able to pay fees for our children and have a decent living,” said Zimta secretary-general Tapson Sibanda.