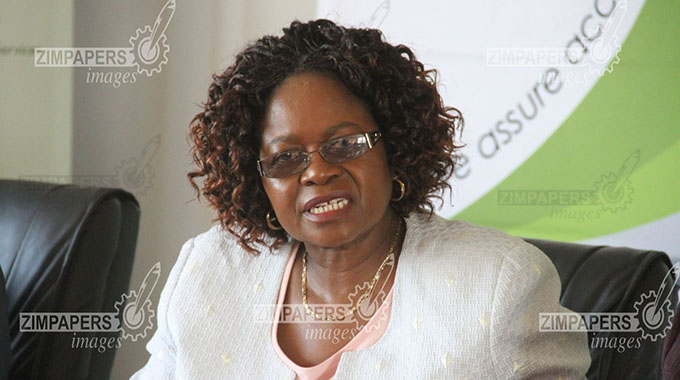 THE INTERVIEW Daniel Nemukuyu
Auditor-General Mrs Mildred Chiri (MC) recently released an audit that exposed the rot in ministries, Government departments, local authorities, State enterprises and parastatals. A number of malperformances have been exposed, with some bordering on corruption, misappropriation of funds, theft and abuse of power.

The report also shows incompetence on the part of some officers in the public sector. Some local authorities are not cooperating with the AG’s Office and they do not avail financial statements in time.

Our Investigations and Special Reports Editor Daniel Nemukuyu (DN) caught up with Mrs Chiri, who speaks on her mandate as the country’s AG, corruption in the public sector and challenges facing her office among others.

DN: Can you briefly tell us about your mandate as Auditor-General?
MC: My mandate is derived from the Constitution of Zimbabwe Amendment (No. 20) Act 2013 and the Audit Office Act (Chapter 22:18). The functions of the Auditor-General as provided for under Section 309 (2) of the Constitution of Zimbabwe as read together with the Audit Office Act are as follows:

To audit the accounts, financial systems and financial management of all departments, institutions and agencies of Government, all provincial and metropolitan councils and all local authorities;

At the request of Government, to carry out special audits of the accounts of any statutory body or Government-controlled entity;

To exercise any other functions that may be conferred or imposed on him or her by or under an Act of Parliament.

DN: We have noticed that your recent report deals with some audits covering periods as far back as 2014, why are we not having up-to-date reports?
MC: The problem is with parastatals and local authorities who are in arrears with their financial statements. I can only audit what would have been presented to me for audit.

DN: You audit State institutions regularly and produce audit reports. Are there any improvements on governance and appropriation of funds or it is just an academic exercise?
MC: Yes, there are some improvements registered in that some recommendations are being implemented, but there is still room for improvement.

DN: From your experience, who are the chief culprits in misappropriation of funds? Top management or the low ranking officers?
MC: What we mainly observe are loose internal accounting controls which lend themselves to possible leakages.

As to those responsible for misappropriation, this can best be determined by the courts.

DN: Assessing information gathered during the audit exercise, where exactly are the parastatals, local authorities and Government departments getting it wrong?
MC: There is need for enforcement and consequences for non- or malperformance. Non-action on reports is also to do with inadequate enforcement.

DN: What criteria do you use when referring certain cases to the investigating arms?
MC: We do not outline any criteria, but leave it to law enforcement arms who are experts to go through our reports.

We give copies of our report to the investigating arms to study them and determine matters that lend themselves to criminal allegations for their action.

DN: Most audit reports expose corruption in the public sector annually, but a little is done to arrest the culprits. What is your comment on that?
MC: I encourage the law enforcement arms of Government to go through my reports and take appropriate redress measures on issues that lend themselves to criminal prosecution as we are fighting the same battle of promoting accountability and transparency.

DN: Any words of advice to the ministries, Government departments, parastatals, local authorities and State enterprises on best governance and financial appropriation practices?
MC: I also urge ministries, local authorities and State enterprises to implement the recommendations that I have highlighted on each finding. They can apply any alternative measures that best address the findings because the ultimate objective is to be fully accountable to the taxpayers.

DN: Can you share the challenges you are facing in executing your duties?
MC: Resources are a challenge in the form of motor vehicles for conducting field visits, computers and financial. Like the rest of Government, we have not been spared by the paucity of resources.

DN: Have you registered any success stories so far?
MC: Yes, we have a lot of them.

DN: Can you share the major successes?
MC: The very fact that we have been able to consistently meet the statutory deadline of having the report tabled by June 30 for five years in a row on a shoestring budget is a great achievement for the office. The office was given an award for implementing IT systems in 2017 by the African Organisation of Supreme Audit Institutions, a regional body to which the Office of the Auditor-General of Zimbabwe is an affiliate member.

This is a body of Auditor-Generals Offices in Africa made up of 24 English-speaking countries and two Portuguese-speaking countries. The office also won an award of excellence in the public sector from the Women’s Leadership Awards in 2016.

DN: Do you have adequate human resources to do the job?
MC: The human personnel is not sufficient. Ideally, the current staff establishment should be doubled.

During 2018, my staff only managed to carry out field audits of 549 outlying stations against a total of 3 320.