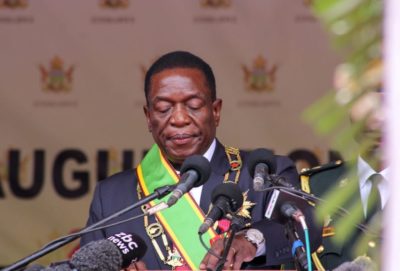 ARTISANAL miners in Bubi District, Matabeleland North province, on Tuesday, staged a demonstration to protest against attempts to evict a local miner to pave way for a company allegedly linked to white former commercial farmers.

The artisanal miners, who were joined by community members, carried posters calling on the Zimbabwe Anti-Corruption Commission (Zacc) and President Emmerson Mnangagwa to investigate officials at the Mines ministry for allegedly allocating the disputed mining claims under unclear circumstances.

The disputed mining claims are in Inyathi’s Famona ward 23 area under Village Two.

Clement Moyo, a local miner and proprietor of QCB Syndicate which has been operating in the area for years, is embroiled in an ownership dispute with Morven Mine Mining Company, allegedly linked to white former commercial farmers, one T Harris and Clive Hallamore, according to court papers at
hand.

It is understood that Morven Mine Mining Company is claiming ownership of shares, resulting in the matter spilling to the High Court.

On Tuesday, protesting artisanal miners said the mine dispute had cost them income.

“War vets help us! Harris and Martin stop bribing Mines (ministry) officials! No to corruption at the Ministry of Mines! Zimbabwe is not Britain! President ED, help us,” some of the placards read.

Said Zanu PF ward 23 chairperson Miller Mlillo: “We are not against them on racial grounds, but the issue that is troubling us is that we understand the same people who want the miner evicted have a lot of mining claims in the area.

“As such, for us the community, there is nothing racial about us supporting businesspersons of our skin colour who have offered jobs to many unemployed youths in the area.”

Moyo refused to comment, saying the matter was before the courts.

In his interim order issued on October 23, Bulawayo High Court judge Justice Thompson Mabhikwa directed that mining operations at the disputed site be suspended pending the resolution of the ownership dispute.

“It is ordered by consent that all mining activities be suspended on the claims described as Mucklenuck, surveyors Co-ordinates UTM Zone (35) … consisting of 10 gold reef which are registered under number 49194 in Famona, Inyathi,” the interim order reads in part.

“Second respondent is directed to ensure that the area … is cordoned off for suspension of mining activities thereon within five days of this order being granted, pending the finalisation of the investigations and determination of the dispute by the second respondent.

“The third respondent is directed to oversee and ensure that all plant, machinery and equipment is decommissioned and demobilised by the applicants and first respondent from the disputed area.”