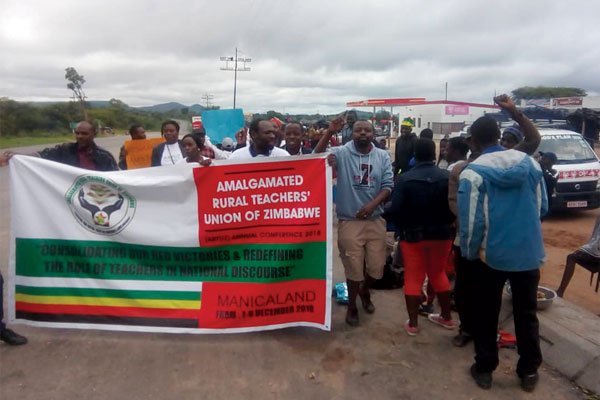 THE 14 teachers belonging to the Amalgamated Teachers Union of Zimbabwe (Artuz), who were arrested in Ruwa on Tuesday while leading a 275km march from Mutare to Harare, have been freed by a Harare magistrate who said they had committed no offence.

The teachers, who were represented by human rights lawyers Kossam Ncube and Tinomuda Shoko, appeared before magistrate Victoria Mashamba and challenged their placement on remand.

Ncube submitted a copy of their letter to the police officer commanding Harare to notify them of their demonstration, but he refused to endorse it.

“The State is saying they were singing and shouting, but that is not a crime according to the Constitution of Zimbabwe,” Ncube said.

Prosecutor Shepherd Makonde then called detective Brian Makomeke to tell the court why he had arrested the teachers.

Makomeke said the teachers appeared drunk and were walking in the middle of the road, shouting and disturbing the flow of traffic.

He said the motorists were taking pictures, disturbing the free movement of vehicles.

“My colleague, who is in charge of Ruwa, advised me that there were people holding placards, catching attention of motorists. Accused persons wanted to show the motorists some of their placards,” Makomeke said

“I then challenged them to go off the road and later wanted to know their identity and what they were doing. I told them they were under arrest for their conduct, and also we were not aware of their demonstration. I caused some of my subordinates to recover the placards they were holding.”

Ncube asked Makomeke if it was his first time to hear people singing, and he replied in the negative.

Makomeke failed to identify the teachers he said were walking in the middle of the road.

Ncube said the police were overzealous when they arrested his clients, saying their union act did not oblige them to notify any authority when they want to share their grievances.

He said the police should have charged the motorists who were taking pictures of the protesters in the middle of the road.

Magistrate Mashamba said the teachers were members of a legally registered organisation and exempted from notifying authorities on their actions and that the State did not show any evidence of public provocation. Presenting a petition was not an offence, she noted.

The latest arrest follows a similar arrest in Macheke at the weekend where the protesters were eventually released without charge on Monday.