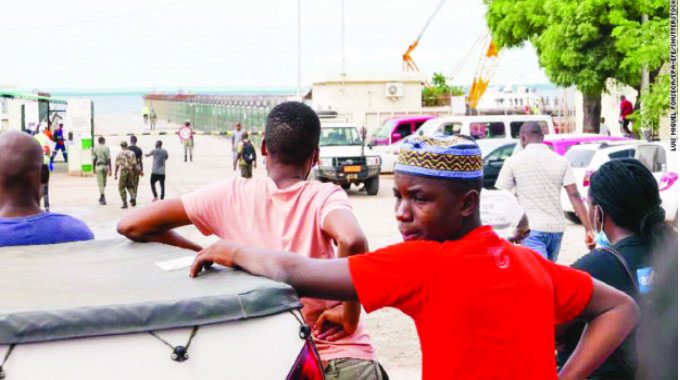 People in Pemba, Mozambique, await the arrival of more ships from Palma as people flee attacks by rebel groups this week.

PEMBA, Mozambique – The assault over the last week by Islamist militants on a town in northern Mozambique is the most serious and deadly in their four-year insurgency — and directly threatens the country’s economic future.

People who escaped the town of Palma in Cabo Delgado province speak of dozens of bodies scattered on the streets — some beheaded, of buildings burned to the ground, banks raided and the local army barracks ransacked

The group that carried out the attack is known locally as Shabaab – the Youth– but little is known about its ideology or organisation. What is clear is that its reach has expanded across much of Cabo Delgado, a province the size of Austria. Mozambique’s government, despite the assistance of private military contractors from South Africa and Russia in the past two years, has been unable to halt its momentum.

Shabaab has become so successful that it was admitted in 2019 to the Islamic State’s Central Africa Province (ISCAP), which calls the group Ahl al-Sunnah wa al Jamma’ah (ASWJ). Since then, the group captured a significant port – Mocimboa da Praia –last August and has now overrun Palma. Its operations have also disrupted massive projects to develop Mozambique’s natural gas reserves.

On Monday, ISCAP claimed responsibility for the Palma attack – its first claim in Mozambique since November 2020. The ISIS-affiliated Amaq news agency said the attack had “resulted in the deaths of 55 Mozambican forces and Christians including contractors from outside the country.”

The attack on Palma began last Wednesday. The insurgents came from three directions in a well-planned operation. Some of the assailants wore military uniforms, according to regional security sources, confusing the small number of troops based there.

And for the first time, the group appears to have deliberately targeted foreign workers, dozens of whom were trapped at a hotel on the town’s northern outskirts.

A convoy of 17 vehicles tried to escape Palma on Friday for a complex run by French oil company Total about 15km to the north. But the convoy ran straight into an ambush set by the insurgents: The occupants of several vehicles are still unaccounted for. Others hid in the forest and were rescued.

Thousands of local people are thought to have fled into the bush or mangrove swamps, or tried to escape by boat, according to aid agencies. Some have begun arriving in the port of Pemba, 200km to the south, adding to Mozambique’s already vast pool of internally displaced: Around 670,000 people according to the United Nations. – Agencies.