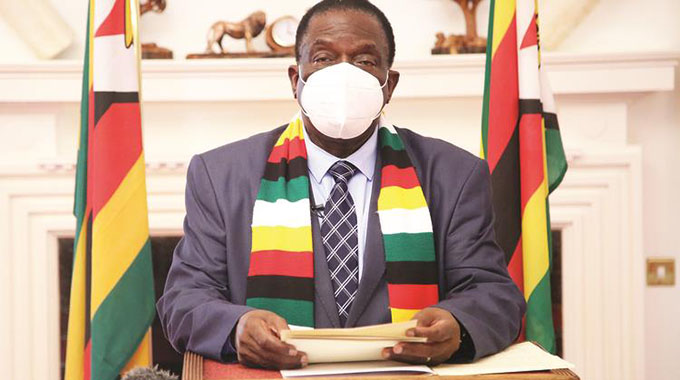 Zvamaida Murwira
Senior Reporter
President Mnangagwa yesterday called for collaboration to upgrade the pharmaceutical manufacturing capacity in Africa as part of broader measures to fight Covid-19, which has claimed many lives on the continent and beyond.

Speaking during the closing sessions of the 34th African Union (AU) Ordinary Session of Heads of State, which tackled the Covid-19 pandemic, he commended member countries for the sterling work they are doing to curb the spread of the disease.

The summit adopted President Mnangagwa’s proposal that South African President Cyril Ramaphosa be appointed as champion for fighting the disease given his sterling work during his stint as chairperson of AU and what he has done to contain the pandemic in his country, which has been the continent’s epicentre of the disease.

In an interview at State House yesterday after the two day virtual summit , Acting Minister of Foreign Affairs and International Trade Professor Amon Murwira said the President believes that Africa in general and Zimbabwe in particular should strive to have home-grown solutions using foreign linkages.

“His Excellency has always been a true believer in the Africanisation of Africa in making sure that Africa has the capability to do things that make it develop,” he said. “You hear quite often His Excellency saying Zimbabwe can only be developed by its people, through themselves or their linkages. Africa is the same.

“When it comes to Covid-19, he talked of pharmaceutical manufacturing capacity within the continent. It is a big thing. He also talked about the importance of a restructured and focused AU. He had a proposition that President Ramaphosa be appointed as the champion for fighting Covid-19. And this was adopted.

“He has a lot of concentration and he has his eyes on the ball. He sat through the two days listening. This is the character of Zimbabwe being expressed through him.”

Key issues that were discussed by AU leaders, who met virtually as part of measures to contain Covid-19, included the collective Covid-19 response, testing, vaccine procurement, peace and security, as well as food security.

There was also solidarity on the people of Cuba where a call to lift American imposed sanctions were made, the need for the right to self determination for the people of Palestine and the need for total decolonisation of Mauritius, referring to the retention of Diego Garcia island and the rest of the Chagos Archipeligo as a British colony and American military base.

“The main issues that came were the restructuring of the AU, that was presented by President (Paul) Kagame (Rwandan President) and resolutions were adopted making sure that the AU, all Commissioners are appointed on merit and that there be financial frugality,” said Prof Murwira.

“There was also the issue of Covid-19 whose report was led by President Cyril Ramaphosa. The issue was basically to look at the way Africa has responded to Covid-19. Although we have a lot of problems, it is amazing the way Africa has always overcome challenges.

“In Africa, the Covid-19 deaths are around 90 000, whereas in certain single countries there are over 100 000 deaths. But in the whole continent, with 1,4 billion people, and with the perception of limited resources in terms of financial capacity, you can see that Africa has more resources than what you can think of.

“These were the two main issues that were looked at and we believe that Africa is looking forward.”

The two-day summit was held under the theme “Arts, Culture and Heritage: Levers for Building the Africa We Want”.

Prof Murwira said no elections were held in which two Zimbabwean candidates were vying for posts after it emerged that the Southern African slots were already occupied by Angola and Zambia.

The two are Engineer Amos Marawa (former Permanent Secretary in the Ministry of Transport and Infrastructure Development) who was vying for the Infrastructure and Energy portfolio and Professor Fanuel Tagwira (the Permanent Secretary in the Ministry of Higher and Tertiary Education) for the Education, Innovation, Science and Technology Commission portfolio.

Prof Murwira said the theme of the summit coupled with the fact that Zimbabwe was hosting the African museum meant that Harare’s activities were in line with the African direction.

“The issue of heritage is important,” he said. “Some people think about heritage as putting on magagada (a traditional dancing instrument). It’s a deep word. It means the way we live, the way we exploit our natural resources, the way we industrialise have to depend on what we have.

“Sometimes it has been interpreted lightly to think that heritage is about mbira and zvidhumbu. Heritage defines us, what we have for the betterment of our people. There is a lot of science, engineering, social cohesion and innovation embodied in the word heritage.”

In his closing remarks, newly-elected chairperson and Democratic Republic of Congo President Felix Tshisekedi said the AU will continue to fight Covid-19.

He commended the work that was done by President Ramaphosa in steering the continental bloc and fighting Covid-19.

Mr Faki pledged to continue working hard for the good of the continent.