Authorities must account for the disappearance of three opposition leaders

Source: Authorities must account for the disappearance of three opposition leaders | Newsday (News)

Authorities in Zimbabwe must urgently account for three missing female leaders from the opposition Movement for Democratic Change – Alliance (MDC-Alliance) and ensure their safe return, Amnesty International said today amid growing fears for their safety. 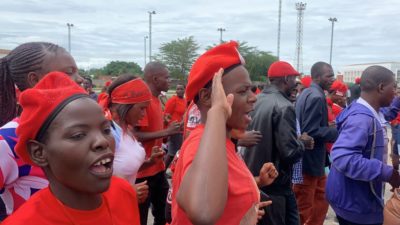 Police have denied that the three are in their custody.

“Zimbabwe has a history of enforced disappearances, with some activists having gone missing for years now. Many activists have been tortured in police custody, despite denials by police. The longer these activists are in custody the higher the risk of torture.”

The three women were part of a demonstration organized by MDC-Alliance Youth against the state’s failure to provide social protection for the poor during the current COVID-19 lockdown. As the country tries to curb the spread of the pandemic, many people are not allowed to go to work, putting them at risk of poverty, hunger and starvation.

According to the state-owned newspaper, the Herald, the national police spokesman, Assistant Commissioner Paul Nyathi, confirmed the trio’s arrest, although he was still to find out where they were being held.

A local non-governmental organisation, Zimbabwe Lawyers for Human Rights, has searched more than eight police stations to establish their whereabouts with no luck.

Some sources say the trio are being held incommunicado, to pressure them to release information on how the demonstration was organized without police knowledge.

“It is deeply alarming that the state claims that it cannot account for the three activists when they were arrested at a roadblock run by both the police and the military,” said Muleya Mwananyanda.

“Authorities must urgently institute a search operation and do all within their power to ensure the safe return of these activists. There must be a full and thorough investigation into their abduction, with those suspected of criminal responsibility brought to justice in fair trials before an ordinary civilian court.”

The post Authorities must account for the disappearance of three opposition leaders appeared first on NewsDay Zimbabwe.