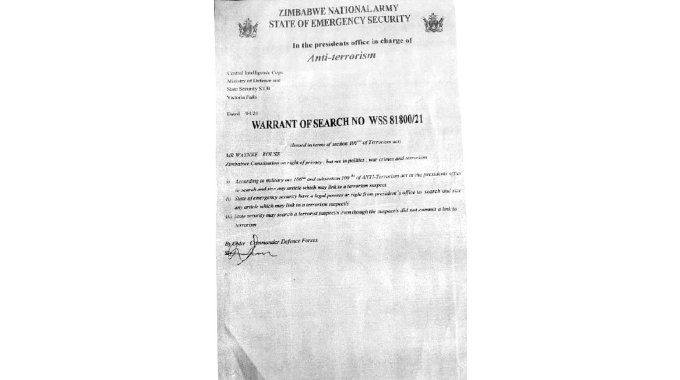 A fake warrant of arrest

A group of armed robbers masquerading as members of the Zimbabwe National Army and Criminal Investigation Department detectives is on the prowl, robbing people using fake search warrants.

The gang, which numbers between four and six, has targeted various households especially in Mashonaland West and Mashonaland Central provinces with areas such as Chegutu, Kadoma, Chinhoyi, Christon Bank and Mazowe, being targeted.

ZNA Director of Public Relations Colonel Alphios Makotore yesterday warned the public to be on the lookout for the robbers.

“The gang, numbering between four and six criminals, will be dressed in ZNA camouflage uniforms and others in civilian attire acting as Criminal Investigations Department police officers,” he said.

The robbers then produce fake search warrants to unsuspecting individuals.

While the victims will be in a state of panic and fear, they then confiscate goods and other valuables.

The fake warrants are purportedly signed by the Commander Defence Forces claiming that the bearer has the authority to search premises or individuals and seize any articles which may lead to acts of terrorism.

Col Makotore said the ZNA was not conducting such operations, adding that anyone purporting to be representing the organisation in such acts were criminals.

“The fake search warrants have been recovered and are being used by the police as exhibits,” he said.

He advised the public who are approached or come across any of the bogus soldiers and police officers to immediately report to their nearest police station or the Zimbabwe Military Police Investigations Branch on cellphone number 0712 831 705 or landline (0242) 252 094.