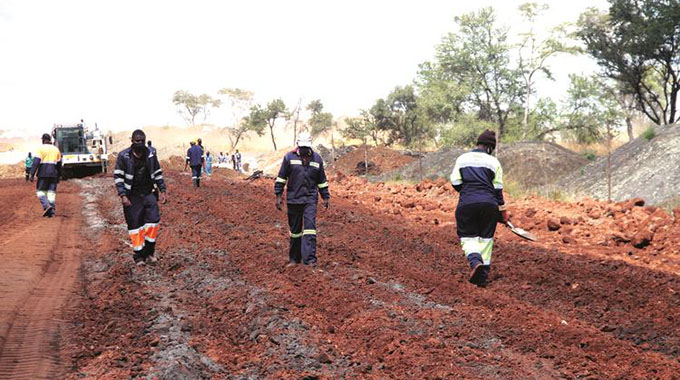 Victor Maphosa recently in Beitbridge
Five Zimbabwean companies contracted to widen, rehabilitate and upgrade the Harare-Masvingo-Beitbridge highway are confident of completing all the roadworks and have the revamped road fully working next year.

More than 150km have been completed and opened to traffic. All five contractors have finished at least one 20km stretch, with some now having finished two, and all the five are busy on their next allotted stretch.

Last week, Transport and Infrastructural Development Minister Felix Mhona and senior Zimbabwe National Road Authority (Zinara) officials toured the highway to have an appreciation of the roadworks which are currently in progress.

The five companies are each given blocks of 20km. Once they have finished the 20km stretch, they are allocated another one.

After completing his tour, Minister Mhona said all the contractors have promised to complete the roadworks and have the whole upgraded road being used by traffic next year.

“This was a worthwhile tour where we started at Skyline tollgate and witnessed the capacity that we have as Zimbabweans. I managed to see all the contractors on the Harare-Beitbridge road and I am actually pleased with the progress so far.

“We are targeting 200km by end of 2021 to make it 400km. We would then have covered 400km in a space of two years which is something great. We are grateful to the Second Republic for availing domestic resources so that we upgrade   this road.

“We have seen that contractors are up to their timelines. Some have difficult escarpments but they have done a wonderful job. I am glad that contractors are right on target in terms of their achievements. They have promised us that by end of 2021 they would complete the 400km and that means we would be left with 180km which we hope by 2022 the road works would be complete,” he said.

One of the companies tasked with the upgrade, Exodus Company, said they are now working on their second phase, after they completed 20km which is now open to traffic.

“The first phase has been completed, it has unique features including climbing lanes strictly meant to accommodate slow moving traffic so that fast moving traffic can pass easily. Our phase two is now 31 percent complete and we target to complete it by end of June.

“We have phase three which is to be started in May and we expect to complete it by this year end. We have already started our preliminary preparations so that we would be ready to start come May 5 this year,” Exodus site manager Engineer Fanuel Tivaone said.

Beside road works, Exodus is also involved in community work to ensure the living conditions of people in the area they are working are improved.

“Our project is in the rural community. We have employed more than 150 locals including 50 women. We have also installed water taps at our camping site for the community to access water to drink. We are also working with the Mwenezi Rural District Council and recently we rehabilitated the parking area at Lundi for heavy trucks.”

Engineer Munyaradzi Meki of Fossil Contractors said they have already completed 40km and are now working on their third phase which he said will be completed in August this year.

Another contractor, Bitumen World said they have completed two phases and are now also on phase three with their earthworks for phase three having already reached 10km.

Tensor Systems said they have already completed phase one and their second phase is almost complete with 10 km of the second phase already open to traffic.

Masimba Constructions said they have completed phase one and now they are working on phase two which they are expecting to complete in June this year.