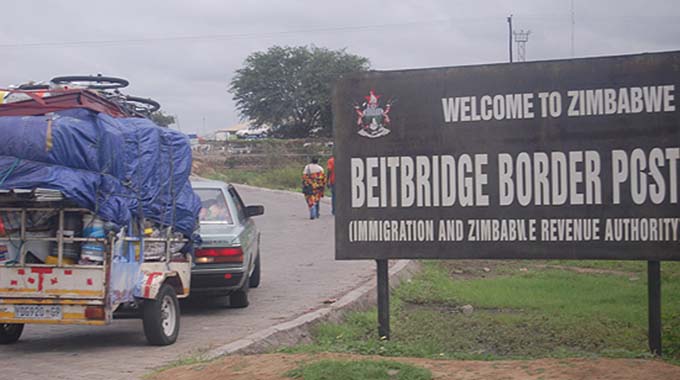 Joseph Madzimure and Thupeyo Muleya
Zanu PF has dismissed claims in sections of the South African media that Zimbabwean authorities are responsible for the congestion at Beitbridge Border Post, saying some media personnel appear to be doing the bidding of exiled former party members who are bent on tarnishing the image of the country and its leadership.

Director for Information and Publicity Cde Tafadzwa Mugwadi was yesterday involved in a social media spat with SABC foreign editor Sophie Mokoena, whom he accused of creating fake and negative stories to tarnish the image of the country.

Ms Mokoena blamed the Zimbabwean Government for high volume of people crossing the border, describing the movement of people as a crisis.

Cde Mugwadi said Beitbridge Border Post was shared by two countries which were both responsible for the movement of people.

Cde Mugwadi said Ms Mokoena had joined the anti-Zimbabwe crusade and was now a notorious purveyor of fake news in the region through exaggeration of isolated or foreign incidents to resurrect a crisis narrative that had lost steam on the basis of being fake.

“She has become an underground instigator of xenophobic attacks targeting Africans and Zimbabweans in particular. The whole SADC region is focused on Covid-19 with South Africa being the hardest hit, having surpassed the 30 000 deaths mark, but all that doesn’t concern her.

“She has abused her position as foreign editor of the SABC to vilify Zimbabwe, doing the bidding of the seditious G-40 faction that is working with a disgruntled faction in the African National Congress (ANC).

“The good thing is that our two revolutionary parties are aware of that and when they met last time, they agreed that social media should not set an agenda for them,” said Cde Mugwadi.

He said Ms Mokoena was unaware that Zimbabweans from across the political divide were tired of fake news which sought to present them as second class Africans to South Africans.

The tiff comes after the Zimbabwe Revenue Authority (zimra) last week, dismissed claims by a South African government minister that congestion at Beitbridge Border Post was attributable to the use of a manual system by Zimbabwe to clear commercial cargo.

zimra said it was using the Automated System for Customs Data (ASYCUDA World) to process imports and exports of private and commercial cargo.

South Africa’s Home Affairs Minister, Dr Aaron Motsoaledi had told journalists in Pretoria that the congestion at Beitbridge was being worsened by the unavailability of an automated system on the Zimbabwean side, to clear commercial cargo.

zimra said the claims by Minister Motsoaledi were unfounded considering that the revenue collector was using the ASYCUDA World, which was the highest version currently available.

“The clearing system is therefore highly automated and supports a number of high-end efficient processes. The statement referred to above is therefore not factual and unfounded,” said Zimra spokesperson, Mr Francis Chimanda. Meanwhile, authorities at Beitbridge cleared most of the people who wanted to leave the country between Sunday morning and Tuesday evening.

Sadc’s busiest inland port of entry has been a hive of activity following the announcement of a suspension of general passenger travel by Government at the weekend.

The suspension took effect from Tuesday and under the new set up, only foreigners and Zimbabweans who are legal residents or have study and work permits in foreign nations are allowed to depart through airports and land borders.

Motorists yesterday said they had been cleared on the Zimbabwean side of the border and were now awaiting passage into South Africa.

“Things are improving, we have been here for the last 24 hours. The majority of the motorists you are seeing here are only drivers and their assistants. The bulk of the travellers are already in South Africa,” said Mr Bulelani Tshuma.

Only commercial cargo is now being cleared at the border.

Government has also deployed more security personnel, drones and an army helicopter at the country’s border with South Africa to curb illegal activities.

Authorities believe that the Treasury could be losing over US$1 billion annually in unpaid customs duty because of smuggling activities at Beitbridge Border Post and several illegal crossings.

It is understood that the organised evasion of duties is also compromising state development projects and the viability of businesses that abide by all customs requirements.

There are security bases after every 30km on the 250km stretch of the Limpopo River which divides South Africa and Zimbabwe.