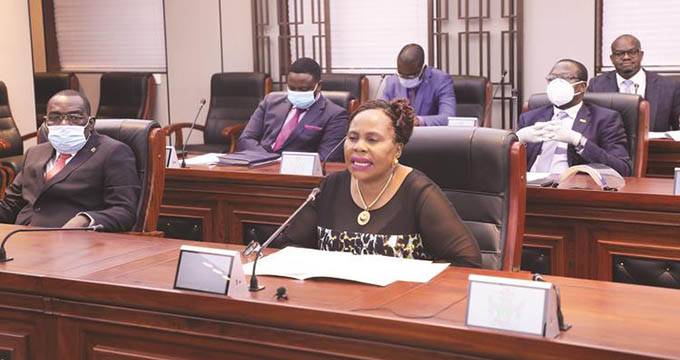 Regarding the supply of testing consumables, it worth noting that the 21 080 Gene Xpert cartridges in stock are sufficient for over six months, giving room for the country to stock up on other consumables required. The Ministry of Health and Child Care is updating guidelines on the wearing of face masks by children in order to strengthen the control and prevention of infection in schools and communities.

On materials production, Cabinet notes that there has been an increase in demand for disposable masks and sanitisers following the recent re-opening of schools for examination classes. There are adequate stocks of most locally produced PPEs and medicines for supportive management of Covid-19 cases, and satisfactory quantities of raw materials for increased production in the event of a surge in demand.

Cabinet continues to remind citizens that Covid-19 regulations are there to protect them and prevent the spread of the pandemic, and should be adhered to.

In the education sector, the Ministry of Primary and Secondary Education continues to monitor the daily attendance of examination classes’ teachers and pupils countrywide. For the week ending October 16, 2020, increased overall teacher attendance was recorded in Masvingo, Matebeleland North and Manicaland compared to the attendance statistics for the previous week. The Ministry of Primary and Secondary Education will this week conduct field visits to assess school preparedness for the impending Phase 2, which will see Grade 6, Form 3 and Form 5 learners resuming classes.

Under Phase II, the Republic of Belarus will supply an additional US$51 940 149 worth of farm mechanisation equipment, following the successful launch of the first US$51 million facility on September 30, 2020. The 1 337 tractors, five disc harrows and 16 combine harvesters to be supplied under Phase II will raise the mechanised tillage area by one hundred and thirty three thousand seven hundred 133 700 hectares. The implements for the tractors will be acquired locally since Government has already started the process of capacitating local industry to manufacture tractor-drawn implements. Through this approach the country will get more tractor units, save on foreign currency and capacitate the local industry.

Having noted the challenges faced by farmers across the country and the heavy livestock losses due to tick-bone disease, Government has put in place the proposed toll manufacturing programme. Under the programme, the Department of Veterinary Services will procure imported raw materials while Chemplex locally produces materials required for the manufacture of the dipping chemicals. This will ensure that the major challenge of shortage of foreign currency is overcome. Large savings in the total cost of production will also be realised when the Government imports the raw materials from international suppliers and Chemplex concentrates on toll manufacturing for Government.

Reports on the sixth 100-day cycle
Cabinet received update reports on progress made in the implementation of the sixth 100-Day Cycle Projects from the Ministers of Home Affairs and Cultural Heritage; Foreign Affairs and International Trade; Finance and Economic Development; Health and Child Care; Justice, Legal and Parliamentary Affairs; and Information, Publicity and Broadcasting Services.

The Minister of Home Affairs and Cultural Heritage highlighted that the cecentralisation of passport services to Chitungwiza district is 28 percent complete, with cabling, network connection, equipment installation and procurement and configuration of computer hardware and software still outstanding.

The Mbuya Nehanda Memorial Statue is 70 percent complete and the statue is now ready for mounting. It will be mounted once the base structure is complete. Following are other projects that the ministry is undertaking during the current cycle: 1. Construction of super structure for Chimoio camp flat “C”, Harare (Zimbabwe Republic Police; 2. Chiremba Balancing Rocks Monument, Epworth , Harare; 3. Establishment of community archives of Zimbabwe ZCC Mbungo, Bikita, Masvingo; and Construction of bachelor’s flats at Kazungula Border post.

The Minister of Foreign Affairs and International Trade reported that he had held and delivered lectures, held diplomatic briefings and conducted interviews which had significantly boosted the country’s image internationally. The re-engagement programme had continued slowly due to travel constraints occasioned by the Covid-19 outbreak. Engagements with the USA and EU will continue until sanctions are lifted. On a positive note, consumer services continue to be enhanced with usage of virtual platforms.

The Minister of Finance and Economic Development highlighted that the National Development Strategy: 2021-2025 (NDS1) remained on course for launching in early November 2020, with the draft document going through the final approval processes. On the country’s finances, revenues continued to improve due to enhanced revenue collection and administration. Government managed to pay salaries on due dates and was able to increase salaries in June and September. The Ministry has also undertaken the following projects during current cycle; 1. Pre-budget strategy paper; 2. Financial re-engangement; 3. Strengthening of the PFMS system; 4. Launch of the Development Cooperation Policy and Manual of procedures; 5. Implementation and 6. External Resource Mobilisation

The Minister of Justice, Legal and Parliamentary Affairs highlighted that the ministry had successfully launched the food production programmes at various prison farms. Other projects included are 1. Fighting corruption; 2. Construction of Chinhoyi and Mt Darwin Magistrate’s courts as well as Judicial Services Commission offices at the same sites

The Minister of Information, Publicity and Broadcasting Services reported the following projects that were at various stages of implementation 1. Refurbishment of the Ministry of Primary and Secondary Education’s radio studio; 2. Construction of a solar powered mobile stage and public address system for radio road shows; 3. Production of Covid 19 informercials and 2020 Heroes commemorations skits/radio and television jiggles in 16 national official languages; and 4. Installation of an outdoor public viewing screen in Umguza District, Matebelaland North.

Honourable Vice President CGDN Chiwenga, as the Minister of Health and Child Care outlined the projects being undertaken by his ministry as follows: 1. Construction of a primary care  centre in Harare South; 2. Establishment of the Bartley Memorial Block, Covid-19 isolation and treatment centre, Obstetric Fistula Unit  at the United Bulawayo Hospital; 3. Rolling out of the electronic health record system, Covid-19 status electronic tracking system and 4. Establishment of Covid- 19 community isolation centres in Bulawayo and Matebeleland South provinces.

Zimbabwe Liberation War Museum concept  and implementation plan
Cabinet considered and approved the concept and implementation plan on the Zimbabwe Liberation War Museums, which was presented by the Minister of Home Affairs and Cultural Heritage.  This is in line with the Constitution of Zimbabwe which specifies the need for Zimbabwe and its people to remember and uphold the country’s liberation history by commemorating “our heroic resistance to colonialism, racism and all forms of domination and oppression, exalting and extolling the brave men and women who sacrificed their lives during the Chimurenga/Ummvukela and national liberation struggles”.

The purpose of the museum is to tell the story of Zimbabwe’s Liberation Struggle in its totality and to display the associated materials, and other objects and artefacts. The liberation war museum aims to unpack the rich heritage established by the sacrifices and commitment of the gallant freedom fighters, institutions, individuals and communities to the liberation of Zimbabwe.

As such, the museum will stimulate the celebration of freedom and cultural diversity among Zimbabweans, thus fostering a deep sense of belonging, pride and identity among the Zimbabwean citizenry. Most importantly, the museum will allow Zimbabweans to tell their own story of the Liberation Struggle, thereby establishing the true facts of the Struggle as opposed to the current situation whereby the story is told by outsiders who may have vested interests which are contrary to Zimbabwe’s. It will also highlight pre-colonial Zimbabwean civilizations and innovations as well as give an in-depth understanding of colonial conquest and how it affected the economic, political and social foundations of the country.

As a country born out of protracted liberation struggle, Zimbabwe’s national identity is anchored upon the shared history of the struggle against colonial conquest and the sacrifices that various people made towards attainment of independence.  It is against this background that it of utmost importance for the country to establish a museum dedicated to the collection, preservation and presentation of material on the country’s liberation struggle.

Economically, the museum will inspire creative industries, since it incorporates studios for the various genres and other value chain aspects of the visual and performance arts. The museum will also attract high volumes of domestic and international tourists from both the general public and specific interest groups.

Among others, the Museum will include the following significant components: permanent and temporary galleries; library and information centre; a research centre; conference facilities; and audio-visual studio.

Update on the medicinal cannabis production programme
Government has passed measures and regulations guiding investment into cannabis production. A competitive regime of incentives has been put in place to attract the needed investment.  Details in that regard can be obtained through the Zimbabwe Investment and Development Agency (ZIDA).

Cabinet considered and approved a proposal to review upwards the board fees and sitting allowances of non-executive directors of State enterprises and parastatals. The fees and allowances were last reviewed in October 2019.