IN keeping with a long-standing tradition, the City of Harare has created a festive spectacle of Christmas lights at Town House, which glows magnificently during the night, belying the national feeling of doom and gloom. 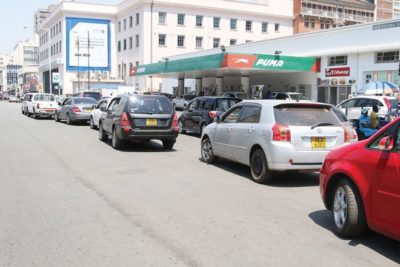 Christmas lights will also be lit at the Centenary Park in Bulawayo this weekend, while several retail outlets countrywide have also brightened their shops with bright Christmas trees.

But the Christmas cheer is hardly showing on the faces of most Zimbabweans.

While an average worker in the region will be flocking to holiday resorts in their countries or across the region, holding festivities at home and travelling to see friends and family, which is routine at this time of the year, the majority of Zimbabweans will almost certainly be languishing at home, wallowing in misery due to the erosion of their salaries and plunging standards of living.

The bulk of Zimbabweans earn salaries through the Real Time Gross Settlement (RTGS) system, at a time government is stubbornly insisting that bond notes and RTGS system are at par with the United States dollar. In reality, however, the US dollar is over threefold stronger than these quasi-currencies on the alternative market.
Business has responded by introducing a three-tier pricing system, which is reflective of the situation on the ground, but punitive to consumers, whose salaries have not been adjusted in line with the fluctuating rates.

In fact, salaries are now over three times less in value than they were this time last year due to exchange rate differentials and inflation. In December last year inflation was 3,46%; now it’s 31,01%.

With Christmas just four days away now, the price of basic commodities have gone up and varies, depending on the mode of payment used.

With hard cash, chicken is selling for $10, while the same bird can be bought for upwards of $15 through various electronic platforms.

There is also a price denominated in US dollars, in line with Zimbabwe’s three-tier pricing system. But not many Zimbabweans have access to the greenback, considering the acute shortages of foreign currency crippling the local economy, among other challenges. Ordinary Zimbabweans, including the so-called middle class or professionals, have seen their quality of life plummet. Their counterparts in neighbouring countries with relatively stable economies, such as South Africa and Botswana, are sure to revel in the festivities associated with the holiday, celebrated globally.

Zimbabwe’s ongoing currency volatility crisis, fuelled by government’s insistence that the bond note — derisively called the “zollar or bollar”, is equivalent to the US dollar — has seen the earnings of most ordinary citizens wiped away in value. Currently, US$100 is equivalent to 330 bond notes on the thriving parallel market. The least paid civil servant earns $350 bond notes, paid through the RTGS, which translates to just over US$100 in real terms. The 2% tax introduced by Finance minister Mthuli Ncube on electronic transactions in October has further eroded disposable incomes at a time prices of basic commodities have spiralled out of the reach of many. Other than the exorbitant prices, some commodities are also not available on the shelves of most retail shops.
Fuel shortages, which intensified in October as government struggled to mobilise foreign currency for importing the commodity, are now more pronounced. This will surely inhibit most people from travelling this holiday. Multitudes of Zimbabweans mostly travel to their rural homes and different towns to celebrate Christmas with relatives. Transport fares have gone up due to the acute fuel shortages and currency issues.

As Zimbabweans contend with the reality of a bleak Christmas, many are also having to worry about paying rentals, buying school uniforms, astronomical school fees, and meeting their day-to-day needs.

Consumer Council of Zimbabwe (CCZ) executive director Rosemary Siyachitema said prices of commodities are rapidly rising. “Prices of goods as we celebrate Christmas will be beyond the reach of many. It will not be Christmas as usual,” she said.

Zimbabwe Congress of Trade Unions (ZCTU) president Peter Mutasa blamed government for “stealing the people’s happiness” through implementation of harsh economic policies.
“For workers and the ordinary citizen there is no Christmas to talk about. The government has stolen people’s happiness. This is a bad Christmas for the majority. In fact, citizens are facing starvation because many households are food insecure,” Mutasa said.
“Many parents are not able to send their kids to school. Travelling is not possible in the face of a crippling fuel shortage. Salaries have been eroded by up to four times, rendering most workers paupers.”

The post Bleak xmas amid economic turmoil appeared first on The Zimbabwe Independent.