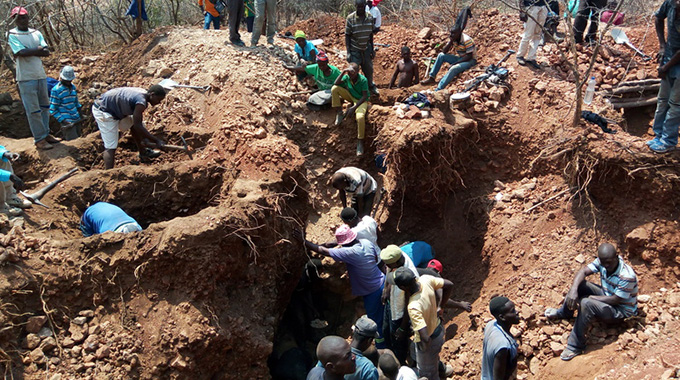 Matabeleland South provincial police spokesperson Chief Inspector Philisani Ndebele said the gang was found in possession of axes during the raid which was conducted in the early hours of Monday morning.

He said police in Matabeleland South launched an operation on Sunday, targeting illegal mining sites in the province.
“We raided an illegal mining site in Vova area on Monday morning where we arrested 60 people comprising 44 men and 16 women.

“Vova is one of the hotspots in the province where we have recorded murder and serious assault cases involving weapons such as machetes and axes.

“We found the gang in possession of a few axes and an assortment of goods for sale such as beer. We, however, didn’t recover any machetes and we assume that they had probably hidden them in the bushes,” he said.

“This raid is part of an ongoing operation which we started on Sunday, and we will continue conducting them in other mining areas across the province where there are illegal activities.

“Other problematic areas include Mphoengs in Mangwe, Filabusi and Esigodini. Recently, we received reports of violence in Matshetsheni area in Gwanda as some gold deposits were discovered there.”

Chief Insp Ndebele said the operation was also part of a clampdown on machete gangs who had been accused of causing violence in some mining towns across the province.

He said in a recent incident, a man was murdered in Mphoengs area in Mangwe by a group of machete-wielding men in a dispute over a mining area.

Chief Insp Ndebele said violent crimes being recorded in mining areas were as a result of fights over claims.
“The problem we have in the province is of illegal mining activities which have resulted in violent crimes as people fight over claims.

“As police, we continue to urge people to register their mining operations. Once all mining operations are regularised and people enclose their mines, then we will have less cases of people fighting over undesignated areas,” he said.

“These groups of people known as Mashurugwi are also taking advantage of this chaos, and are descending on innocent people and harming them,” he said.

Last week, police in Matabeleland South issued a three months prohibition order against carrying of dangerous weapons in public as part of efforts to reduce criminal activities involving these weapons which are being recorded in the province.

In Matabeleland North Province, police spokesperson Chief Inspector Siphiwe Makonese said Operation “No to Anarchy” has been ongoing in Inyathi, Bubi District for the past few months.

She said they were still compiling statistics detailing arrests and successes during the operation.