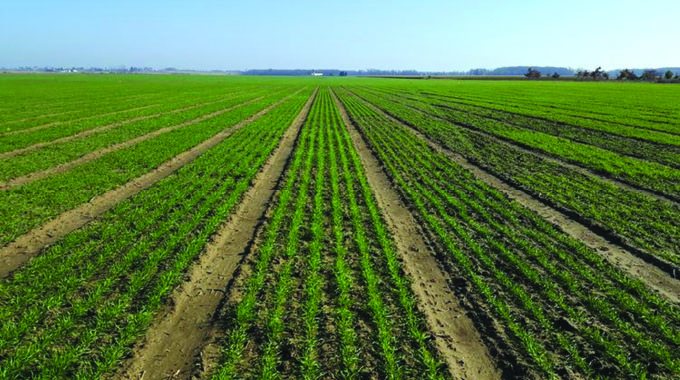 Zimbabwe needs at most 360 000 tonnes of wheat annually so with the projected 340 000 tonnes, it will need very little in terms of supplements, which also means a huge reduction on the import bill

IN 1990, the country recorded its highest ever single wheat harvest with 325 000 tonnes of the cereal being realised.

Today, 31 years later, the country stands on the threshold of yet another promising season in which all the preparatory work points towards a replication of that feat.

The country has since tasked itself with beating a target of 340 000 tonnes this season, which if met, would mean there would be enough for its requirements for the first time since commercial wheat farming started in the 1960s.

Zimbabwe needs at most 360 000 tonnes of wheat annually so with the projected 340 000 tonnes, it will need very little in terms of supplements, which also means a huge reduction on the import bill.

Resource mobilisation for this winter wheat season started in earnest way back with Government setting a target of 85 000ha of land to be put under the cereal.

Production of the crop is being supported from three fronts this time around with 60 000ha being produced through a Government guaranteed CBZ Agro Yield programme, 15 000ha by private contractors and 10 000ha through the Presidential Winner Wheat Scheme.

The Presidential Inputs Scheme will avail seed, fertilisers and chemicals on credit against delivery of the crop and will be expected to pay for electricity and labour.

The arrangement will enable those under-resourced, but interested farmers to participate in the noble cause of making the country self-sufficient as far as its wheat requirements are concerned.

Interestingly, the natural world has also subscribed into the country’s noble pursuits and let lavish rains to drench the earth leaving dams at an average 92 percent full, which means there will be enough water for irrigation purposes.

Over 2 000 farmers have since registered to produce wheat under the CBZ Agro yield scheme alone, which will be taking up the biggest hectarage for the season.

It is exciting to note that Agritex is taking the programme seriously and has since deployed personnel to all wheat growing areas to train farmers on planting, calibration of planting machines, fertiliser application and disease control among other important agronomic practices.

Naturally, with such levels of commitment from all stakeholders, everybody expects sterling results at the end of the season.

The  Government on its part is optimistic the target hectarage would have been met by the second week of June with experts advising farmers to continue planting too although the ideal planting time traditionally stretches from 1 to 15 May every year.

Failure to beat this time frame might not matter if farmers meet most of the agronomic requirements of the crop to allow it to grow, mature and be harvested before the start of the next rain season, which may spoil the quality of the grain.

It is quite refreshing to note that Government is not leaving anything to chance in its quest to make the country food-secure and has made sure even the contracting of farmers was enhanced by the use of information communication technologies, starting with the provision of electronic gadgets to extension staff and motor cycles to boost mobility.

The provision of inputs this time around has been largely better than what happened in previous seasons, with all inputs for the private sector contracted hectarage since secured with distribution almost concluded as of now.

In her recent post-Cabinet media briefing, Information, Publicity and Broadcasting Services Minister Monica Mutsvangwa revealed that the 27 000 tonnes of basal fertiliser, 25 999 tonnes of top dressing fertiliser and 7 450 tonnes of wheat seeds required for the CBZ Agro-Yield programme were available.

She said distribution was in progress, with thousands of tonnes of basal and top dressing fertilisers having been distributed already.

Minister Mutsvangwa hinted that the same was happening with the Presidential Winter Wheat Scheme, which is taking care of the seed and fertiliser supply contracts for the 10 000 hectares.

She addressed a very important part of the wheat production process — the availability of electricity.

There will be enough supplies of electricity and water to meet planting requirements, with the water level in Kariba double that at the same period last year, she said.

This should be sweet music to every farmer’s ears, as they have in recent seasons been made to content with power shortages that ruined their irrigation schedules to the point of writing off part of their crops in worst case scenarios.

Government has since established a high-level Key Stakeholders Taskforce to ensure availability of these critical enablers, while ZINWA has already held a successful stakeholders meeting ahead of the winter season.

All these preparations will not yield positive results if the most important stakeholder, the farmer, does not come to the party. Farmers should also play their crucial part to make sure the crop is well taken care of from the beginning to the end of the season.

To address this, Government has also initiated farmer training programmes on important agronomic practices to ensure they do things correctly and boost yields.

It is crucial to appreciate efforts the country’s leading seed house, Seed Co, is investing towards enabling the country to realise its dream of producing enough wheat through availing varieties with the potential to yield between seven and nine tonnes per hectare under optimum management and can also be established in all the areas where wheat is produced in Zimbabwe.

The company’s agronomist Mrs Wendy Madzura recently confirmed that they were availing disease tolerant and high yielding varieties that can also perform both in communal and commercial set ups.

Seed Co is also going the extra mile to educate débutante wheat farmers on how they should manage the crop and will deploy agronomists to make farm visits and provide on-farm technical advice from planning to planting for the growth period of the crop as well.

The company will also provide technical advice during planting meetings, through television and radio programmes and conduct online sessions as well as train farmers.

We must also remember the self-financing farmers that are involved neck-deep in the wheat programme.

Such farmers also deserve to benefit from the Government training programmes as well as the Seed Co initiative to make sure yields are boosted from all fronts.

One other positive going into the season was Government’s recent upward review of the wheat producer price that was effected immediately.

Prior to the latest price review, the cereal’s prices had been pegged at $11 786, 44 per tonne while grade A wheat was $14 143, 73 per tonne. There are hopes that Government will continuously review the prices in line with the prevailing economic trends.