The Supreme Court on Tuesday ruled that Nelson Chamisa was not the legitimate leader of the MDC, affirming a ruling of the High Court. 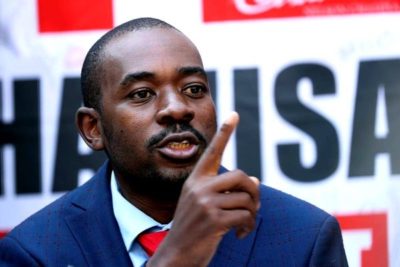 Chamisa had been embroiled in a leadership tussle with Thokozani Khupe, the leader of a faction of the MDC, who claimed she was the legitimate leader of the MDC and that the party should revert to its 2014 constitution.

Khupe approached the High Court, where she won her case, leading to Chamisa’s appeal at the Supreme Court.

The ruling is likely to shake the very foundations of the MDC, as both Khupe and Chamisa’s factions held different congresses.

Chamisa’s MDC Alliance is the biggest opposition party in the country, in terms of representation in parliament.

The ruling is likely to polarise Chamisa and President Emmerson Mnangagwa even further and all but erodes the prospects of negotiations between the two.

On Tuesday morning, ahead of the ruling, Khupe called on her party’s “members and supporters to remain calm and accept whatever the outcome of judgement is. In unity let’s renew an build our great party and country.”

Last October, the Supreme Court reserved judgment in the case where the two are battling for control of the MDC.

The decision was made by Justices Paddington Garwe, Antoinette Guvava and Bharat Patel.

During the Supreme Court hearing, Khupe had urged the judges to recognise the opposition’s party structures that existed in 2014 when the opposition party was being led by its late founder Morgan Tsvangirai.

Khupe won a High Court case, but Chamisa appealed at the Supreme Court.

In her submission, Khupe said High Court judge Justice Edith Mushore did not misdirect herself when she ruled that the MDC constitution does not provide for the appointment of more than one deputy president as was done by Tsvangirai when he appointed Chamisa and Elias Mudzuri in 2016.

Khupe was voted in as MDC-T’s deputy president in 2014, but years later, Tsvangirai appointed Chamisa and Mudzuri as his deputies.

She argues that this was in contravention of the party’s constitution and that for that reason, she should have assumed leadership of the party when Tsvangirai died two years ago.