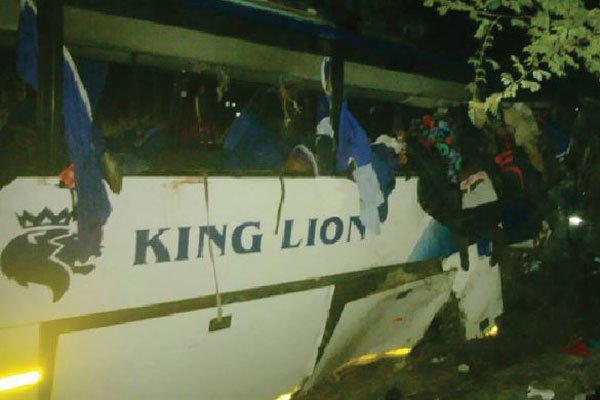 NINE surviving spouses and three guardians of the June 2017 horror accident involving a King Lion bus along the Harare-Chirundu Highway have filed a $2,2 million compensation lawsuit from the bus company and its insurers.

The accident occurred on June 17, 2017 and claimed 43 lives passengers after the bus driver failed to negotiate a sharp curve. The cross-border bus was heading to Lusaka, Zambia.

Both the bus operator and the insurance company are yet to enter appearances to defend.

In their combined declaration, the victims’ relatives claimed the late bus driver, Jimson Ruzvidzo, drove negligently, resulting in the accident at the 257km peg.

The plaintiffs further said on the day in question, the bus was speeding, causing the driver to fail to negotiate a curve.

“He failed to keep the bus under proper control or to stop it when the accident seemed imminent. The deceased persons were bread winners of the surviving spouses and their children,” they said.

“The plaintiffs (surviving spouses) claim compensation in the form of delictual or edictal damages from the defendants (King Lion and NicozDiamond). The first defendant (King Lion) is being sued in its capacity as the employee of the late Ruzvidzo and it is vicariously liable for the negligence of its employee, who was in the course of his duties when he was involved in this accident.

“The second defendant (NicozDiamond) is the insurer of the first defendant and is liable in terms of statutes to compensate dependants of the deceased passengers. All the plaintiffs claim for compensation in the form of delictual or edictal damages for themselves and their minor children from both the defendants jointly and severally one paying the other to be absolved. They also claim for interest at the prescribed rate from date of judgement to date of payment in full. They also claim costs of suit. The grand total claimed by all the plaintiff is
$2 225 692.”