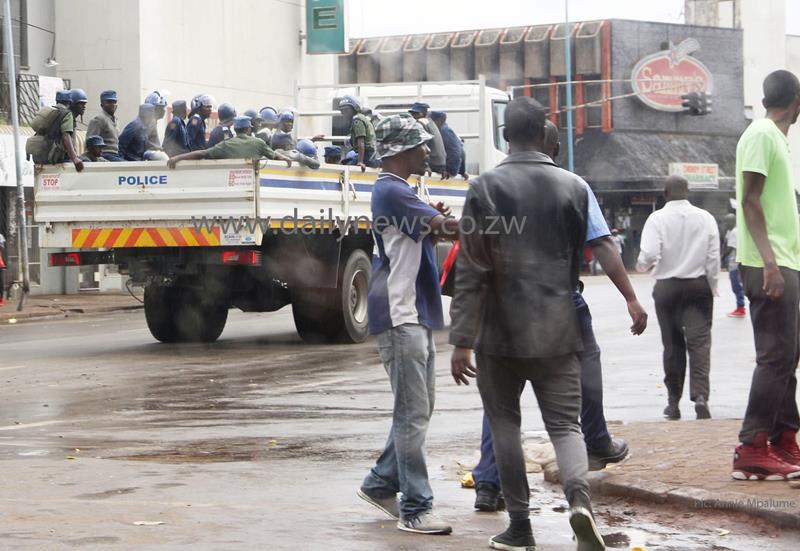 Zimbabwe Congress of Trade Unions president Peter Mutasa and #ThisFlag leader Evan Mawarire called on citizens to stay at home from January 14 to 16 to protest against President Emmerson Mnangagwa’s move to hike fuel prices by over 100 percent.

This development triggered action among frustrated Zimbabweans who were already reeling from worsening economic conditions.

Businesses, schools and companies were forced to shut down during the mass stay-away, with angry protesters barricading roads and engaged in deadly clashes with law enforcement agents.

The protest brought the country to a total shutdown, with industry and commerce grinding to a halt. The strike gravely affected the crucial foreign currency earning exporters. The Zimbabwe Stock Exchange ground to a halt, incurring substantial losses.

All government facilities were also shut down.

High density suburbs, which are normally abuzz with activity as well as the affluent middle, and low-density suburbs were all quiet.

Supermarkets and pubs were closed. And even the oldest profession of prostitution was brought to a halt.

There was no activity in most suburbs in Harare, which was the centre of these protests. Some vendors said their wares were looted. In fact, the entire SMEs sector was affected.

The protests spread to other cities, with Bulawayo engaged in running protests, while other cities joined in on Tuesday.

Confederation of Zimbabwe Retailers (CZR) president Denford Mutashu said supermarkets lost out millions as they were forced to stop operating. Some of them reportedly lost goods to protesters who looted groceries during the national action.

Mutashu condemned the looting and said citizens should avoid engaging in violent demonstrations.

“The cost runs into millions and CZR urges Zimbabwean citizens to follow and observe the law and desist from engaging in counter-productive violent demonstrations that disturb peace, stability and tranquillity.

“Engagement and dialogue are key to resolving issues. This culture of violence should be shunned by all well-meaning Zimbabweans,” Mutashu said.

In a video that was circulating on social media, Bulawayo’s Pumula residents were seen stealing and loading groceries onto trollies at Choppies Supermarkets. Goods worth thousands of dollars were reportedly lost to the rowdy protesters.

Vendors also encountered severe losses as they also had to keep their goods, some of which have a short shelf life, at home till the end of the shutdown. Many who hawk perishable goods said they were struggling to recover.

Survival Vendors Union of Zimbabwe director Obey Mwariwangu told the Daily News on Sunday that vendors were behind the shutdown but the losses experienced cannot be ignored.

“Some of our vendors sell perishable goods. Some had ordered stock and after two days, their goods were almost rotten, especially mangoes and vegetables.

“We lost over $500 000 as vendors make around that amount from selling their different wares per day,” Mwariwangu said.

He urged government to take responsibility and address the critical situation faced by Zimbabweans.

“We support the stance taken by Zimbabweans against sky-rocketing prices. I think it’s a noble cause but the president has to understand that we are in a crisis.

“They cannot expect a person from Chitungwiza to use $10 and government should address the situation as soon as yesterday,” he added.

This comes as Zimbabwe Revenue Authority’s Trade Union (Zimratu) also joined the stayaway last Monday as they released a press statement alerting that some of them won’t be able to report for duty due to incapacitation.

“The bus fare to work is $10 return trip against the $3 return trip being paid by the employer. Most of our workers are unable to report for duty with effect from January 14 due to incapacitation,” Zimratu president Dominic Manyangadze said.

This comes as transport operators also took the heat of the shutdown as they parked their vehicles, fearing destruction of their vehicles.

Bulawayo’s transport association, Tshova Mubaiwa’s marketing director, Ndaba Mabunda, said they stopped operating as they feared for the safety of their employees.

Despite encountering significant losses, he said his organisation believes the shutdown was for a good cause.

“One kombi brings in $100 per day and we could have made a lot of money during those three days. However, life is more important and we are better safe than sorry.

“We would rather keep our vehicles than lose them to protesters,” Mabunda said.

Information, Publicity and Broadcasting Services minister Monica Mutsvangwa blamed opposition parties for the violence that rocked the country during the stayaway suggesting that it amounted to “terrorism.”

“The events of the past 36 hours have been characterised  by well-coordinated criminal behaviour, a destructive and violent pattern which includes murder of a police officer, Constable Maune of ZRP Entumbane, Bulawayo, who was stoned to death in cold blood, and the injury of several others, barricading of roads and extorting money from motorists, reckless destruction of infrastructure such as bridges and tollgates, callous burning of school bus and at least 30 motor vehicles, looting of shops    in Chitungwiza Town Centre, Harare, Bulawayo and Kadoma, harassment of innocent members of the public, disruption of children’s lessons in schools, forced closure of business entities, attempts to overrun police posts and steal weapons, destruction of property, unlawful possession and discharging of firearms in public, attacking and robbing tollgates of cash,” she said.