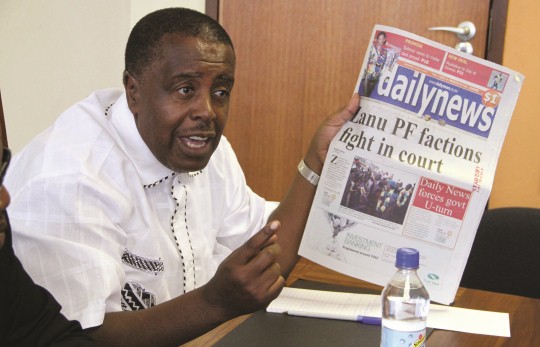 Molai and Housing Corporation Zimbabwe (Private) Limited are the applicants in the matter.

Molai said Nguni portrayed him in a negative light at a May 3 news conference as being a corrupt businessperson who was fleecing State pension fund National Social Security Authority (Nssa) of public funds and making housing developments without permits or approvals.

He also took umbrage at claims by Nguni that he was abusing his personal relationship with the former first family for corrupt and personal gain. Molai is married to former president Robert Mugabe’s niece, Sandra.

“First defendant (Nguni) held a press conference on or about 3 May, 2018, where he invited various persons and media houses to attend after which he proceeded to make wrongful, untrue and defamatory statements against the plaintiffs…The first defendant is a commissioner with Zacc responsible for investigations,” Molai said.

The Pacific Cigarette Company boss is now demanding $200 000 from Nguni for defamation of character arising from utterances he made during the press conference.

“The first defendant’s utterances at the press conference referred to above were broadcast and widely publicised in both electronic and print media.

“The aforesaid utterances were not only false but defamatory and meant to scandalise the plaintiffs and tarnish their good image.

Molai further told the court that despite a written letter of demand for Nguni to retract his statements or make an apology, Nguni has refused to do so.

“As a result of the defendant’s utterances that were widely publicised, plaintiffs have suffered in their respective reputations and have been lowered in the estimation of their respective, business associates, clients, colleagues, business partners and the general public,” he said.

Nguni is still to respond to the claim, in a matter which is still pending before the High Court.